Quizzes
Can You Name These 16th Century Italian Composers From the Details?
by Maureen Buja June 26th, 2021

Can You Name These 16th Century Italian Composers From the Details?

In Europe, Italy was the powerhouse of the 16th century. All the power was there in the Catholic Church and all the art, both representational and musical, was there in the many churches and in the houses of the wealthy landowners.

Name these composers from the details!

1. This composer served in Rome at St. Peter’s Basilica as head of music for the Cappella Giulia in the Vatican, appointed in 1551 by Pope Julius II. When he published his first book of masses in 1554, it was the first book of Masses published by a native Italian. His hundreds of compositions provided the following centuries a model for Renaissance counterpoint that was important through the 19th century. 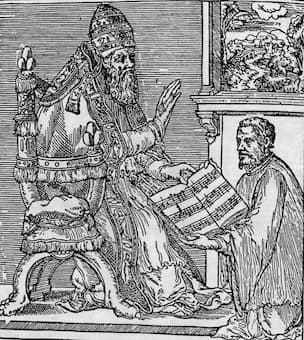 Our composer gives his book of Masses to Pope Julius III

2. Our second composer made his name in Italy but was actually born in the Low Countries (in modern-day Belgium). When in Rome, he worked for Cosimo I de’ Medici, the Duke of Tuscany and, in 1553, became maestro di cappella (head of the singers) at the Basilica of St John Lateran. Eventually he moved to Munich, Germany and worked at the court of Albrecht V, Duke of Bavaria. His fame was such as Emperor Maximillian II made him a noble, Pope Gregory XIII made him a knight, and Charles IX of France invited him for a visit. He is known only for his vocal music and no instrumental music is known by him. He often used the solfège letters of his name to sign his work. 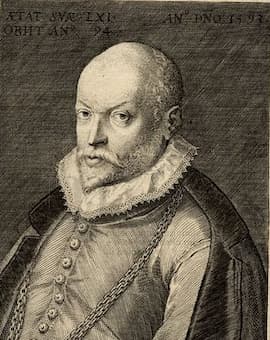 Our composer shown in 1594, as a death memorial

3. This composer made his name in Venice where he was born. In 1585, he was appointed principal organist at San Marco Basilica, one of the most important music roles in the city. Appointed a year later as principal composer of the city, he rose to fame on his musical compositions for San Marco, particularly for those that exploited the church’s architecture. His work in the Venetian polychoral style had choirs on each side of the church singing alternatively and was a remarkable development in church music of the time. 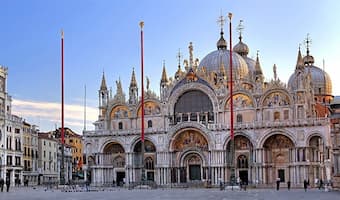 4. This composer held the titles of Prince of Venosa and Count of Conza. He married Donna Maria D’Avelos in 1586, but in 1590, discovering her in bed with Fabrizio Carafa, he killed them both. The Neapolitan court found him not guilty. In 1594, resident in Ferrara, he married Eleanora d’Este, sister of the Duke of Ferrara. His music, particularly in his 5th and 6th books of madrigals, was very dissonant – ostensibly for the reason of illustrating the text, but he went far beyond any composer of his time and it is not until the 19th century that his wild musical settings were matched. 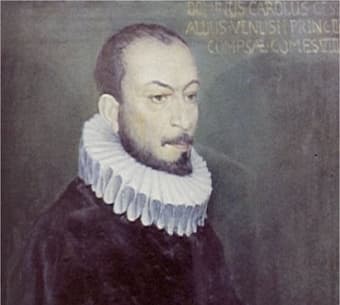 Our composer in an undated painting

5. Our last composer took the principal musical genre of his time, the madrigal, and grew it into a multi-partite form that survives to this day: opera. Baptised in Cremona in 1567, he took up music and published his first book of music in 1582, at age 15. He credits himself as a student of Marc’Antonio Ingegnieri, maestro di cappella at Cremona Cathedral. Hired by Duke Vincenzo I Gonzaga of Mantua, he was one of the many accomplished musicians at the court as the Duke was trying to make a musical center. His experiments in new music brought attacks by the music theorist Giovanni Maria Artusi, saying that his seconda prattica (second practice) music was unorthodox, particularly in its use of musical modes (a modern concept would be key relationships). His first opera, L’Orfeo, was commissioned in 1606 for the Carnival season of 1607. Falling out of favor at the Gonzago court, he sought employment in Venice and was appointed maestro at San Marco Basilica. Three of his operas have survived and remain in operatic repertoire today. It is thought that some seven other operas have been lost, although scattered pieces remain. 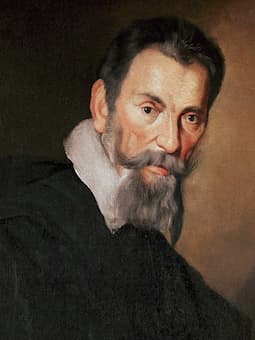 Our composer in around 1640