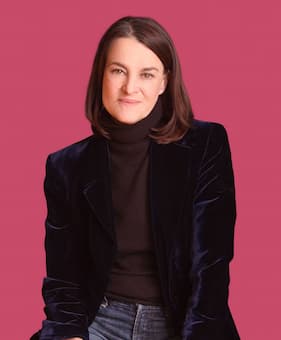 I met the American composer Libby Larsen when we were both just beginning our careers. I had joined the Minnesota Orchestra and with three other colleagues formed The Minneapolis Artists Ensemble, whose mandate was to play a variety of chamber music and to include a newly commissioned work on each program. Libby had in 1973 co-founded The Minnesota Composer’s Forum, (now the American Composer’s Forum) with composer Stephen Paulus, to encourage young contemporary composers. Naturally our group wanted our first program to include something of Libby’s. Little did we know we’d end up playing in a junk yard. And you think you’ve played in some grungy places!


Born in Wilmington Delaware in 1950, Libby has paved the way for a whole generation of composers and has been a major influence. A prolific composer, her compositions include over 500 works, in virtually every genre—from the most intimate to massive—including 15 operas, and many pieces for voice. Libby was the first woman to serve as a resident composer with a major orchestra: our Minnesota Orchestra, the Charlotte Symphony, and the Colorado Symphony. She has won the coveted Grammy award and there are approximately 50 recordings of her works! Currently the Artistic Director of the John Duffy Institute for New Opera (2014-2020) she mentors professional artists and encourages opera-writing by American Composers. 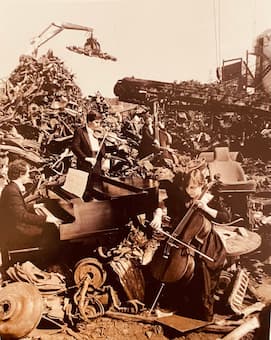 Four on the Floor filming in the junk yard © Ann Marsden

Ms. Larsen told me, “The form, architecture, and energy of a piece of music defines the way we experience a piece of music. Energy holds us together”. When composing she will often begin with an established musical form as the structure around which she builds her pieces. In our era, after 1964, the freeway became ubiquitous. Libby imagined how she could incorporate the freeway as a form for a piece of music. Four on the floor, the slang term for a stick shift vehicle, is an expression from the 1960s when cars were made with a three-speed transmission with the gearshift mounted on the steering column. Later the term became popular in disco music, which depicted a strong 4/4 rhythm.

Our recording of Libby’s piece took place in 1983. At the time MTV was in its infancy, and the internet didn’t exist. Libby, always forward-thinking, believed the future of music would be combined with visual aspects. She brainstormed with Edward J. Corn, then the executive producer of the Minnesota Opera, who’d produced several world premieres. He connected Libby to the up-and-coming film-maker Sandy Smolan (now also a force) to re-imagine the piece in visual terms.

Four on the Floor begins with a piano graveyard scene—spooky, hazy, mysterious, and after a quick journey, ends where cars find their demise—the conveyor belt of a junk yard. It can be interpreted as a metaphor for the fact that in today’s society everything moves quickly and everything is disposable.

The piece weaves in jazz elements, stride piano, and interesting techniques such as snap pizzicatos—the percussive effect you hear when we pluck and allow the string to snap against the fingerboard. 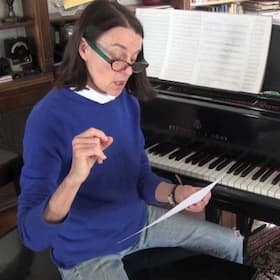 But in addition to the performance of the terrific music we both remember the deafening noise, the intense heat, and the overwhelming smell of burning rubber in the junk yard. I think the stench stuck with me for days afterward. (No pianos were harmed in this video.)

Libby’s 2015 Navona Records Album Circle of Friends features Four on the Floor, a trio for violin, cello and piano, Sifting Through the Ruins written in response to the events of September 11, 2001, for mezzo-soprano, viola and piano, her viola sonata, as well as Up Where the Air Gets Thin another work we performed with the Minneapolis Artists Ensemble.

Despite the strange adjustment 2020 forced upon all of us, Libby has been able to finish the pieces scheduled for that season all of which have been rescheduled. But during this time Libby feels she’s had time to re-orient herself; to focus on the joy of composing, especially collaborating with the finest artists, rather than doing the work in a flurry of motion from city to city in one hotel after another. Upcoming projects include two sets of art songs and several chamber music works, including a commission for harp and violin for the Schubert Club’s 140th season.


We laugh remembering the temperature and reeking air and the fun we had bringing the unique concept to life all those years ago. Sometimes classical music is able to not only make an emotional impact, and to convey a message, but it can do that in a light-hearted way.

I think Libby says it best:

“Music exists in an infinity of sound. I think of all music as existing in the substance of the air itself. It is the composer’s task to order and make sense of sound, in time and space, to communicate something about being alive through music.”