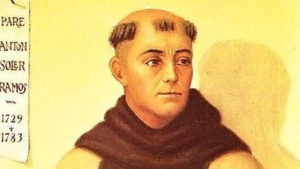 The Spanish-Catalan Baroque composer Antonio Soler (1729-1783), usually known as Padre Soler for his religious appointment, started his music study at age 6 at the school of the Monastery of Montserrat. By 1744 (age 15) was organist in La Seu d’Urgell at the Cathedral, and he took holy orders at age 23. Around 1757, he was appointed chapel master at the Royal Court in El Escorial.

While at El Escorial, he wrote more than 500 pieces, including 150 keyboard sonatas. It is thought that many of these works were written for the Infante Don Gabriel, the son of King Carlos III. He served as the Infante’s music tutor from 1766.

While at El Escorial, he may have met the Italian composer Domenico Scarlatti, who was part of the musical entourage of Carlos III. Even if he didn’t meet him, Soler was familiar with his music, enough that he called himself a ‘disciple of Scarlatti.’ Of his keyboard works, most of these survive in undated manuscript copies, so it’s impossible to establish a chronology for their composition. 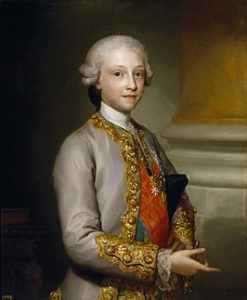 These keyboard sonatas could have been written for either the organ, the harpsichord, or the fortepiano, all three of which instruments Soler had access to. The range of the late sonatas, up to 63 keys, seem to indicate an extraordinary piano. Even Mozart didn’t have a fortepiano with that many keys.

The Franco-Swiss pianist Hélène Boschi, well-known as both a teacher and performer, made her name as a performer of 20th-century music. In the 1950s, however, she discovered the keyboard sonatas of Soler and started recording the works. In 1952, she was the first performer to record the entire set of sonatas, which was awarded the Grand Prix du Disque in 1952.

Her performance is clear and meticulous, although informed by the experience she’s had with much later keyboard music. It’s not quite the crisp Baroque style we’ve become used to, but it does a great deal to bring formerly unknown music into the 20th century. 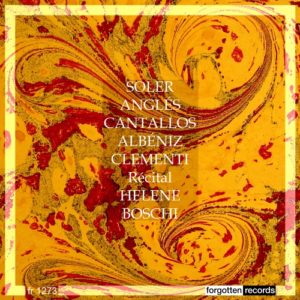