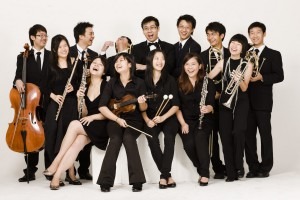 You hear about the Hong Kong Festival Orchestra well before ever going to one of their concerts. Their publicity materials almost rival that of the professional orchestras in Hong Kong: sleek, relevant and eye-catching. In recent years they have invited some excellent soloists and conductors and consistently programme interesting repertoire. For this series of two concerts, we were welcomed with a fake guillotine in the concert hall foyer and black concert programme entitled Death Note (referring to the Japanese manga series popularized over a decade ago). This youth/community orchestra certainly has greater ambitions and an interesting marketing strategy.

The concert on 24 August commenced with Brahms’ Tragic Overture. Esteemed Russian Conductor Vassily Sinaisky, former Chief Conductor of the Bolshoi Theatre, kept the orchestra in good control. There were some minor balance issues, particularly where the strings accompanied the solo winds and brass. Within the turbulence and torment of this work, there could also have been a little more dynamic contrast. But there was great energy in this orchestra and one sensed great pride from all the members, from the downbeat until the final chord.

World-class cello soloist Trey Lee joined the orchestra in Edward Elgar Cello Concerto in E minor. Tragic and contemplative in its own way, it provided a fine connection to the opening overture. Lee was a fine, solid soloist with a perfectly matched sensitivity and a gorgeous vibrato. However, he was not always supported well by the orchestra. The strings could have created a warmer ‘bed of sound’ for the soloist, particularly final two movements. For an encore, Lee performed Astor Piazzolla’s Oblivion, accompanied wonderfully by the orchestra’s Principal Cello, Lo Chee Fung. 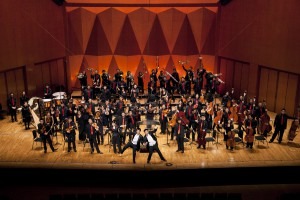 Hector Berlioz’s Symphonie Fantastique, a perennial favorite of Hong Kong audiences, rounded off this first concert programme. It was certainly a good challenge for the orchestra and the right time in its development to tackle it. Apart from some minor issues throughout in tuning and balance, this was a good achievement overall. The symphony certainly highlighted some excellent principal players and sections within the group’s ranks, from the Viennese elegance of the first violins in the second movement, the sensitive oboe and English horn dialogues in the third movement, skillful bassoon obbligato lines in the fourth, and a confident Eb clarinet solo in the fifth. By far the most musically satisfying movements overall were the final two, March to the Scaffold and Dream of a Witches’ Sabbath, where the orchestra explored its full potential with excellent dynamic contrast and rhythmic precision.

The next evening (25 August), the orchestra was joined by its Festival Voices in a performance of Hector Berlioz’s Requiem. This was an impressive and ambitious undertaking, not only due to the sheer logistics of the musical forces involved – I counted almost 300 in the orchestra and the choir – but also the musical execution of the most grandiose Requiem of the composer’s time. It was no wonder that the work had not been performed in Hong Kong for over twenty years. To make it happen in Hong Kong in 2015 required a coming together of musicians from different generations and from a wide range of backgrounds and abilities.

Maestro Sinaisky had a firm grip over the musical forces, which included dozens of antiphonal brass players in the balconies. With an ensemble of this size and many exposed solos, it is natural that intonation was sometimes an issue. The choir’s Latin diction was not always clear, and it was obviously not always easy for the antiphonal brass to catch the conductor’s downbeat. Not to mention some balance issues, particularly during canonic moments between orchestra and choir. But the pros definitely outweighed these (overall) minor issues. Tenor Dominique Morales was glorious in his solo moments in the Sanctus, wonderfully accompanied by the chorus. The Agnus Dei gloriously concluded the evening.

There is great energy and passion in this collective of young musicians and singers. Both concerts were an excellent challenge for this young organization, and we should expect to see more of them in the future.