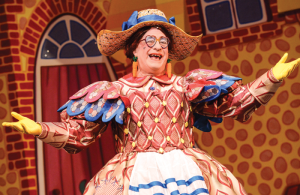 Kenneth Alan Taylor as dame Daisy in Jack and the Beanstalk in 2013.
© Robert Day

We looked last time at the role women could play in taking over voice types that don’t exist anymore – with the demise of the castrato and the changing taste in opera, women had more opportunities on the stage. However, boys and men still take the stage in feminine roles and in more than just English Christmas pantos…!

In Lully’s opera Armide, the malevolent spirit La Haine (Hatred) is sung by a man. The hero, Armide, on the other hand, is sung by a woman (originally, a high French male tenor called the haute-contre). Also in this opera, the three Fates were taken by men. This 1686 opera remained in the repertoire of the Paris Opéra for nearly a century, although they felt free to make changes and cuts if they thought the work would be a success. 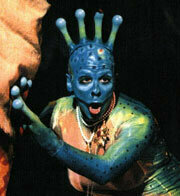 The Rameau opera Platée has a man playing a woman’s role that was always written for a man, again a haute-contre. Platée is a very ugly water nymph who believes that Jupiter, the kings of the gods, is in love with her. It was the comic opera that Paris loved and that got Rameau his appointment as Composer of the King’s Chamber Music.

Just as Rameau parodied the outmoded theatre styles of his day, his characters took the typical love story and moved it to the animal world. Juno, wife of Jupiter, is endlessly jealous. The other gods decide to punish her by setting up Jupiter with Platée, who is very ugly but tries to seduce anything that slithers by her. In this scene, Citheron appears and Platée takes a shot at him, and when refused, says that he’s deceitful and asks him to tell her why, joined by the amphibian chorus (Dis-donc pourquoi (Tell me why)).

The Witch in Humperdinck’s Hansel and Gretel is usually played by a woman, but in the Met Opera production in 2008, the role was taken by the tenor Philip Langridge. Here poor Hansel is tied up on the table while Gretel helps the Witch with the cooking, as it were.

Even earlier, however, in Monteverdi’s final opera, L’incoronazione di Poppea, her nurse, Arnalta, is set for male voice. After a duet between Poppea and her soon-to-be-banished lover Ottone, Arnalta comforts Ottone by telling him that Poppea has no brain otherwise she wouldn’t be hurting him this way. Arnalta’s entrance is at 08:55. 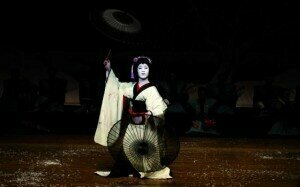 Nakamura Kazutaro in a woman’s role in kabuki

Monteverdi: L’incoronazione di Poppea Act I Scene 11: Ad altri tocca in sorte (Ottone, Poppea, Arnalta)
Although men’s in women’s roles was common in the early days of opera, due in part to many cities forbidding women on the stage, in the modern era it’s much rarer. In other musical genres, it’s still common, such as in Japanese Kabuki, where women are still forbidden the stage.