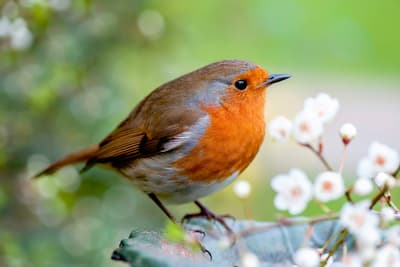 In his 1904 publication, Field Book of Wild Birds, F. Schuyler Mathews made a significant contribution to music, because the title goes on to say …and their Music: A Description of the Character and Music of Birds, Intended to Assist in the Identification of Species Common in the United States East of the Rocky Mountains.

Mathews saw the song of birds as the harbinger of Spring. For him, nothing noted the change of seasons as much as seeing a Robin sitting on a bare elm branch, singing to show that Spring was coming. The meadow might be bare and the skies dull and gray, but the Robin tells us change is coming. Mathews noted that the progression of birds in Spring was always commented on, but never their song.

He notes that there are individual variants in the melodies, and if a bird is particularly different, will tell you when and where he heard it, for example with the Bobwhite, one bird he observed in the Arnold Arboretum in Boston in May 1900, it didn’t sing the augmented sixth normal but only jumped between notes a perfect fifth apart.

Mathews’ book inspired the American composer Irving Schlein (1905-1986) to create his own birdsong, which he did in Strictly from the Birds, a work for piano written in 1980.

From Mathews’ book, we have the music, transcribed and put into standard western musical notation and from Schlein’s music, we have not only the bird music but also Schlein’s additions. 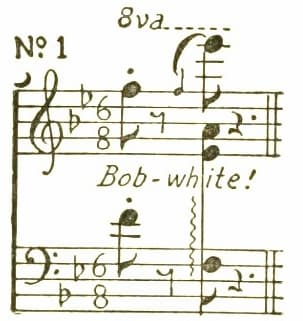 Mathews: Field Book of Wild Birds and their Music: Bobwhite

Mathews’ comments says ‘As his name implies, his song simply combines two tones admirably represented by the syllables, Bob….white! But one must whistle them, or do the difficult trick of whistling and saying the words simultaneously…’ and he goes on to tell you to say the first word staccato and the second word should be a long slurred tone extending ‘all the way from Bob to the end of white…’.

Here’s one in the wild.

and here’s one in the piano that seems to turn into a whole flock of the little quail.


The Scarlet Tanager, who was captured so memorably in Dvořák’s American Quartet, is in Mathews’ book as being a bird that sings in 2-note groups, rarely with the occasional 3-note group. Mathews’ notes one bird he heard in Boston.

And then he heard another one two days later that replied to the first melody with a response in a minor key.

In the wild, the bird’s song is readily identifiable.

Schlein picks up on the two-note rhythms and the alternating descending and ascending intervals.


One of the topics that Mathews picks up time and again only to dismiss it comes when addressing the song of the Robin. In the literature, bird after bird is said to ‘suggest the Robin’s song’ only to have Mathews dismiss it. When discussing the Rose-breasted Grosbeak, he finds that the bird is a bit uncertain on its pitch and Mathews says ‘…there is no certainty about his tones; in every instance it is a questionable C, D, or E…. Hence, the bird never sings his song out of tune, simply because there is no tune to his song…!’ He goes to say that, however, ‘we can always reply upon the bird’s rhythm.’

But what does Schlein do with this? We start out with a normal rose-breasted grosbeak and then all of a sudden, we are in the 3rd movement of Beethoven’s Pathétique. These are very well-educated birds!


It’s been interesting to see a composer’s source material and then to see what he does with it. Many composers worked with bird song, from Clement Janequin’s ‘Le chant des oiseaux’ to Messiaen’s Catalogue d’oiseaux. It’s Schlein, however, who starts with the serious and then transmutes it to something else… unless he’s suggesting that Beethoven picked up a little piece of the Pathétique while on those walks through the Vienna woods.