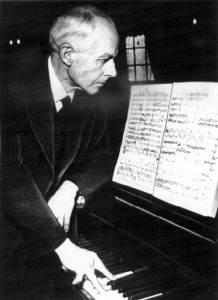 Béla Bartók (1881-1945) was one of the most influential figures in the history of classical music. Composer, performer, educator, and ethnomusicologist, Bartók’s powerfully shaped the way subsequent generations approached and listened to music. Born near the Hungarian city of Nagyszentmiklós, presently located in Romania, Bartók displayed great musical talent at an early age. He could distinguish between different tunes and rhythms before he started talking, and by age 4 he had roughly 40 pieces in his piano repertory. Bartók made his first public appearance at age 11, and eventually studied composition and piano at the Budapest Academy of Music. Under the influence of Franz Liszt, Johannes Brahms, Richard Strauss and the late Romantic idiom, Bartók composed a substantial number of works for solo piano, among them a delightful Scherzo in B Major.

Béla Bartók: Scherzo in B Major, BB 11
The four movements of the Piano Quintet, composed in 1903 and 1904, are thematically linked and reminiscent in tone of Johannes Brahms and Richard Strauss. Yet, Bartók was not slavishly following traditional compositional standards. In the final two movements we find early inclusions of folk elements, resulting in a distinctive Hungarian flavor. A tightly organized formal structure builds on the continual repetition and variations of themes, and unfolds within a highly flexible tonal space. The consistent use of asymmetrical rhythms completes a vocabulary of stylistic features that would soon become familiar elements of Bartók’s expressive language. For one reason or another, Bartók had to be persuaded not to destroy this composition. Thankfully, he took the manuscript with him to the United States, where it was published after his death. 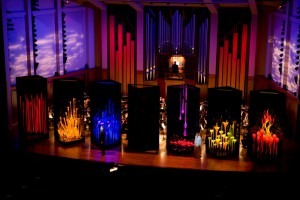 Béla Bartók: Piano Quintet
Hungary enjoyed relative independence within the Austro-Hungarian monarchy, but by the turn of the 20th century a strong national independence movement had begun to emerge. Bartók was enflamed with patriotic fervor and proudly wrote, “I shall have one objective; the good of Hungary and the Hungarian nation.” Inspired by Richard Strauss’s tone poem Ein Heldenleben, Bartók drafted his first large-scale orchestral work. Entitled Kossuth, the work is based on the life and struggles of the Hungarian freedom fighter Lajos Kossuth who led the failed War of Independence from Austria in 1848. Unfolding as a series of ten vignettes—performed without breaks—Bartók provided the following descriptive program note. “ I. (Kossuth) II. (What sorrow lies so heavily on thy heart?) III. (Danger threatens the fatherland) IV. (A better fate then was ours) V. (Yet this brief-lived happiness soon disappeared) VI. (To the battlefield!) VII. (Come, oh come, ye haughty warriors, ye valiant heroes!) VIII. … IX. (All is finished) X. (A hopeless silence reigns.)

Béla Bartók: Kossuth, BB 31
Nationalist fervor and political turmoil inevitably sent Europe spiraling towards a massive war that would devastate the continent. The general sense of anxiety and foreboding found perfect expression in the moody mysticism of Bartók’s only opera. The one-act opera Bluebeard’s Castle was composed in 1911 and features only two characters; Duke Bluebeard and his new wife Judith. The work is set in a dark castle with seven locked doors. Judith insists that all the doors need to be opened, and discovers a torture chamber behind the first door. The second door hides an armory and the third a storehouse of riches. A secret garden hides behind door number four, Bluebeard’s vast kingdom become visible behind the fifth door, and a lake of tears appears behind the sixth. Bluebeard begs Judith to stop, to simply love him and to ask no more questions. Judith insists, and accuses her husband of having murdered his former wives. Behind the seventh door are Bluebeard’s three former wives, still alive, and wearing crowns and heavy jewels. Bluebeard praises each former wife and introduced Judith as his fourth. Horrified, Judith begs him to stop, but it is too late. He dresses her in heavy jewels and a crown, and Judith follows the other wives through the seventh door. Once it closes everything fades into utter darkness.

Béla Bartók: Bluebeard’s Castle
Please join us next time for a closer look at Bartók’s unique musical experimentation that eventually led to a fascinating synthesis of eastern and western musical styles.