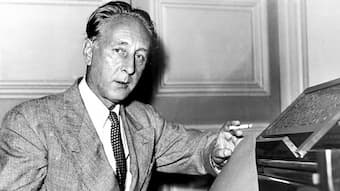 As WWII disrupted the world, many composers fleeing Europe ended up in the United States and were never able to return. One of those composers was Bohuslav Martinů (1890-1959). He moved to France from Czechoslovakia in 1923 and then ended up in the US by 1941. He returned to Europe in 1953, went back to the US, and returned to Europe in 1956. He died in Switzerland in 1959, never having been able to return to his home country.

His primary style was neoclassicism, but his textures were far denser than those used by Stravinsky. This permitted him to sidestep the creations of the Second Viennese School and yet maintain his own unique style.

Neoclassicism, as a style, was a return to an idea of ‘classicism’ that was embodied in ideas of order, balance, clarity, economy, and emotional restraint. The emotionalism of the Romantic era was set aside for a more calm and calculated approach. Program music was no longer the style and was replaced with the idea of ‘absolute music,’ i.e., music for the sake of music rather than for the illustration of a story. Performing forces were reduced; there was a great emphasis on rhythm and texture, rather than melody; and Romantic harmonies were expanded. The historical becomes dressed in modern clothing, to the benefit of both the historical and the modern.

In 1950, the Musical Arts Society of La Jolla, California, commissioned a work from him that turned out to be his farewell to neoclassicism. The Musical Arts Society had requested a ‘tuneful and approachable’ orchestral work, which could be a challenge in the 1950s. What he delivered was his Sinfonietta La Jolla in A major for piano and chamber orchestra, a work that intricately combines a feeling of California with Martinů’s distinctive melodies, characteristic harmonic progressions, and syncopated rhythms.

The first movement sounds very Czech, yet the piano entrance brings that California optimism that is always so striking. We hear Martinů’s use of ostinato and syncopated melodies through this first movement, but they’re not applied with a heavy hand. Just as we hear in the music of Dvořák, he alternates highly rhythmic material with lyrical themes.


The second movement, Largo–Andante moderato, brings the piano to the fore in a melody that wanders, exploring the different tonalities of Czech music. The orchestra seems to float along, under the piano musings, with occasional voicings by the winds, clarinet, flute, and oboe.


The final movement, Allegro, has both a charm and an ‘economy of melody’ that has most drama than the preceding movements. The woodwinds drive to a brass climax and then falls to begin again. The pianist is less a soloist than an ensemble player here, serving the add high bright sounds when needed. The percussion also drives the sound.


The Musical Arts Society had been founded in 1941 by the Russian-American conductor and violinist Nikolai Sokoloff. He was instrumental in the founding of the Cleveland Symphony Orchestra in 1918, directed the pre-WWII Federal Music Project, before creating the La Jolla Music Society. It was an active group, commissioning 20 works between 1949 and 1968, and Martinů’s Sinfonietta was one of those works.

The Musical Arts Society requested a modern work that was both tuneful and approachable. Martinů delivered a little pocket sinfonietta that captured both his background and the modern sound of California in a unique way. We have the rush and hurry of the modern world in the final movement, matched with lyrical melodies in the first and second movement that return us to an older time.