Many countries, particularly those with recent wild pasts, have their favourite bad guys – for the US, it can range from Billy the Kid in the 1880s, nicely made into a ballet by Aaron Copland, to Bonnie and Clyde and John Dillinger in the 1930s. For Australia, it’s Ned Kelly, called both a bushranger and an outlaw by those seeking to bring him to justice.

Ned Kelly (1854-1880) looms large in the Australian imagination of their law-breaking past. Dead at 25, Kelly started his criminal career over a decade earlier. His activities brought him before a judge starting at age 14, for robbery (the charge was dismissed). At age 15, he served jail time for assault and on other charges, then for horse theft, then on to a never-ending and escalating series of confrontations with the police. By 1878, he was the leader of the Kelly Gang, and shortly thereafter, following the death of 3 policemen, the members of the gang were declared outlaws. In an elaborate operation, the Gang robbed the bank at Euroa, holding some 39 people as hostages on a local homestead. Escaping, they next robbed the bank at Jerilderie, having stolen police uniforms the night before. 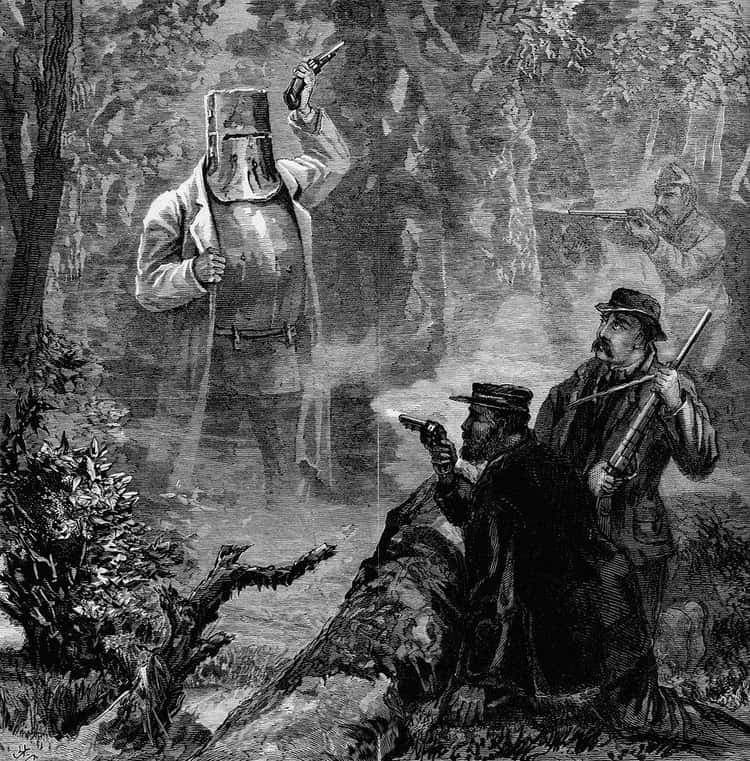 The reward for the capture of Ned Kelly and his gang of 3 started at £200 per head, escalated to £500 per head, and, after the Jerilderie raid, rose to £1,000, then £2,000 per head (approx. AUS$190,000 now). News came to the police that the Kelly Gang was developing armour and was planning a new raid. In a final showdown with the police, the gang came to their final battle at Glenrowan. 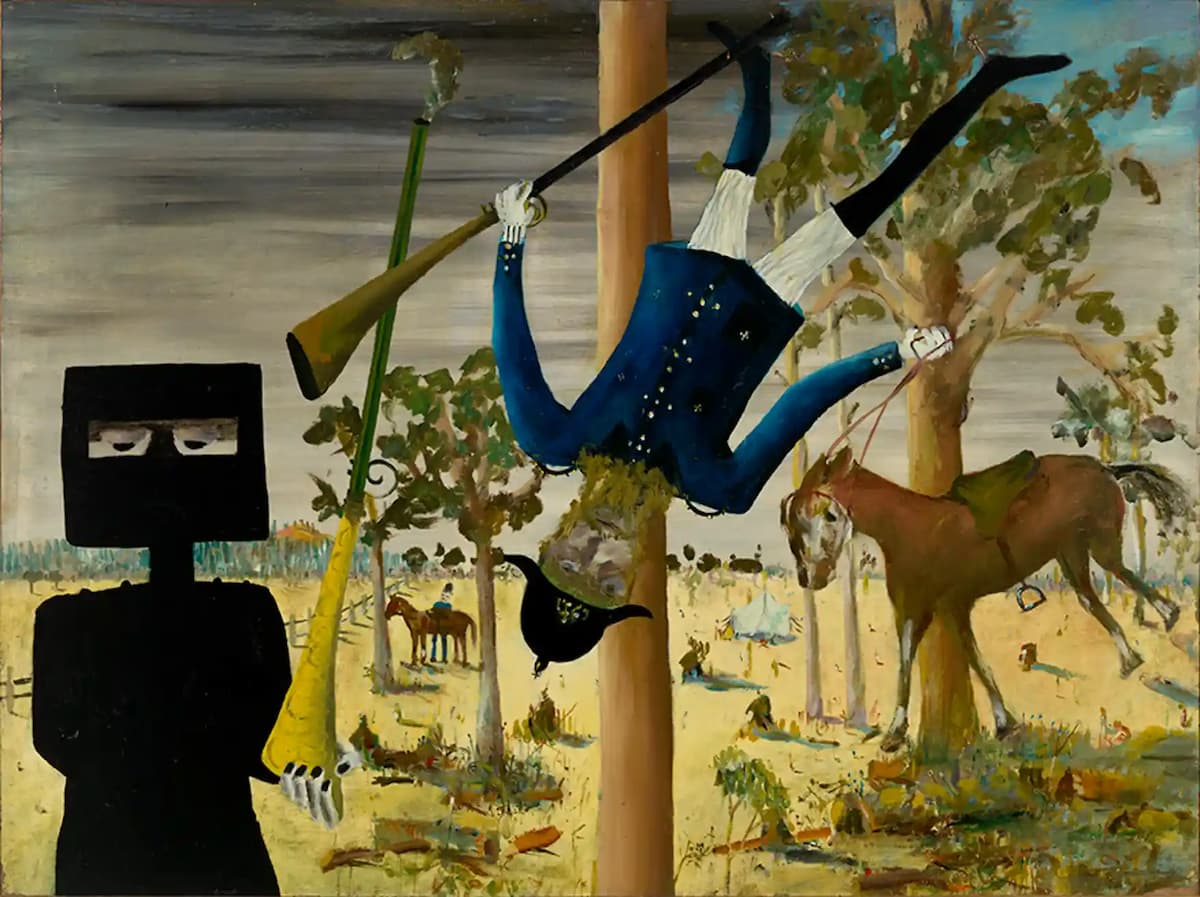 The duel between Ned Kelly in his armour and the police led to his final capture. He stood trial in Melbourne in October 1880 and the hangman claimed him on 11 November, age 25. Along with the name, it is the armour of Ned Kelly that has become iconic. 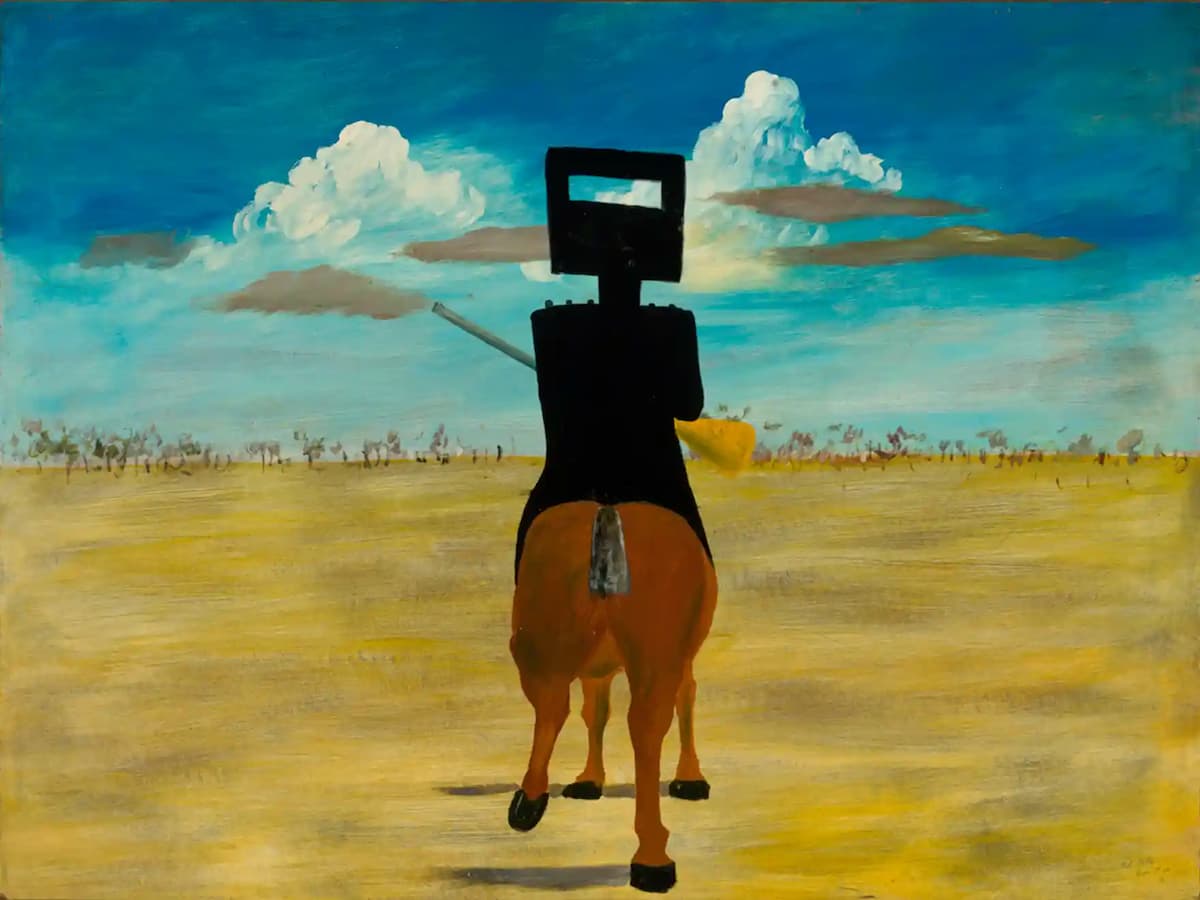 Australian painter Sidney Nolan did a series of 26 paintings of Ned Kelly between 1946 and 1947. One of the most famous of the series is Ned Kelly, shown on a horse, back to the viewer.

The images of Ned Kelly show him as a cipher, always covered in his armour, although, in truth, he only started using this in his last days. Nolan said in 1961 that the inspiration for his Kelly series was ‘Kelly’s own words, and Rousseau, and sunlight’. Kelly’s words were transmitted through a long letter he wrote after the Jerilderie robbery, where Kelly laid out a partially political and partially personal statement of how he (and others of his class) had been wronged and how he was trying to right those wrongs.

The French painter Henri Rousseau, is known for his post-impressionist paintings that have a nearly naïve quality and this is captured by Nolan, particularly in the wooded scenes. The sunlight comes through Nolan’s idea that the Kelly story was ‘a story arising out of the bush and ending in the bush’ and how important it was to place his figure within the vibrant Australian landscape.

Adrian Williams met Sidney Nolan when Nolan was living in Wales and created his Chamber Concerto based on the Ned Kelly series. The concept of a chamber concerto is rare: it requires that every member of the ensemble be prepared to take on the dual role of ensemble player and soloist.


From its very opening, Williams’ work sweeps up the listener in what is, ultimately, a tragic work. Despite Nolan showing Kelly on a horse in the midst of a great sweep of country, the final showdown with his armour was in the woods surrounding the house at Glenrowan. Kelly had escaped the fatal house and, in his armour, was in the woods behind the police lines. The police didn’t locate him until he rose and attacked them from the rear. They finally defeated him by wounding him in his unarmoured legs. 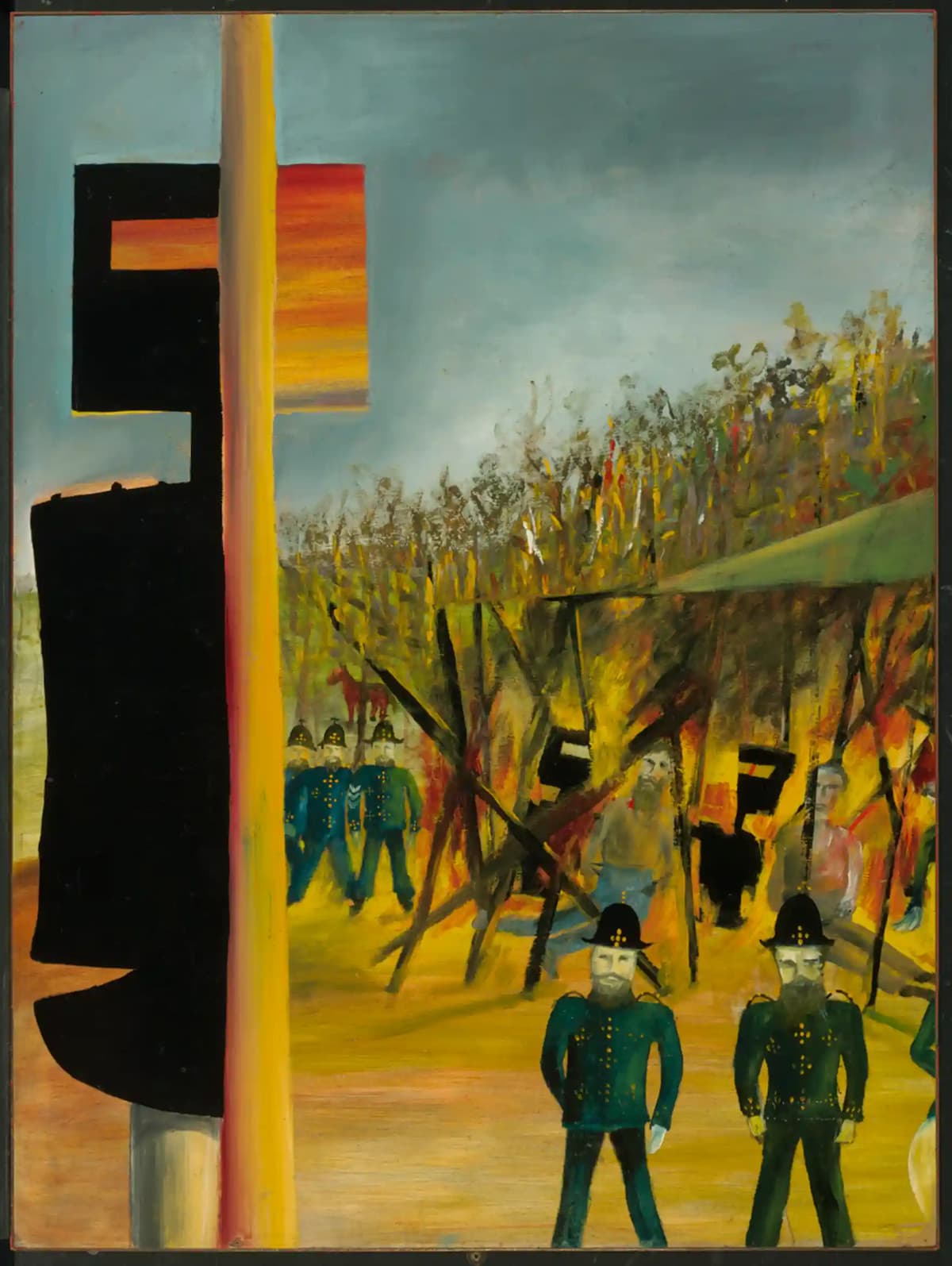 In the music, the same dream-like feeling we have from the paintings emerges. Ned Kelly sits in instrumental landscapes that flow together seamlessly. The eleven players in the chamber concerto (flute /piccolo, oboe/ cor anglais, clarinet / bass clarinet, bassoon, horn, harp, and solo string quintet) use the different instrumental voices and ranges in a virtuoso counterpoint that tells the well-known story.

The real armour did not have the characteristics that Nolan gave to it: there was no neck, and there were no rivets on the shoulders. The front and back pieces were held together at the shoulder with straps. It ended at the waist and there was a front and back apron. At 97 pounds, the armour made movement difficult. In this case, swords weren’t made into ploughshares, as the Book of Isaiah advocated, but ploughshares were made into armour. 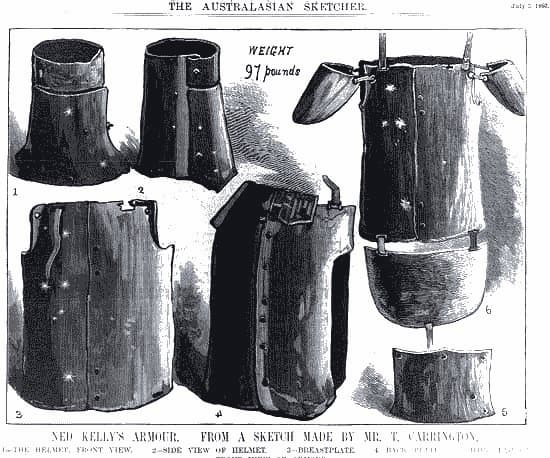 Ned Kelly’s real armour, in the collection of the State Library of Victoria, the helmet, breastplate, backplate, and shoulder plates show 18 bullet marks. No bullets penetrated the armour, but the bullets hitting the metal caused bruising, lacerations, and concussion. Only Ned Kelly’s armour had padding (added by his sister). 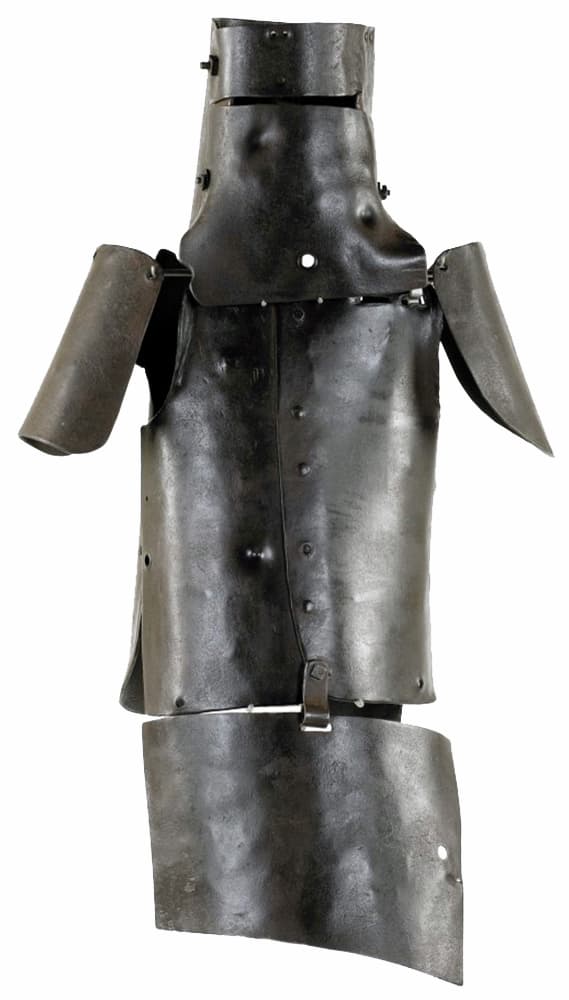 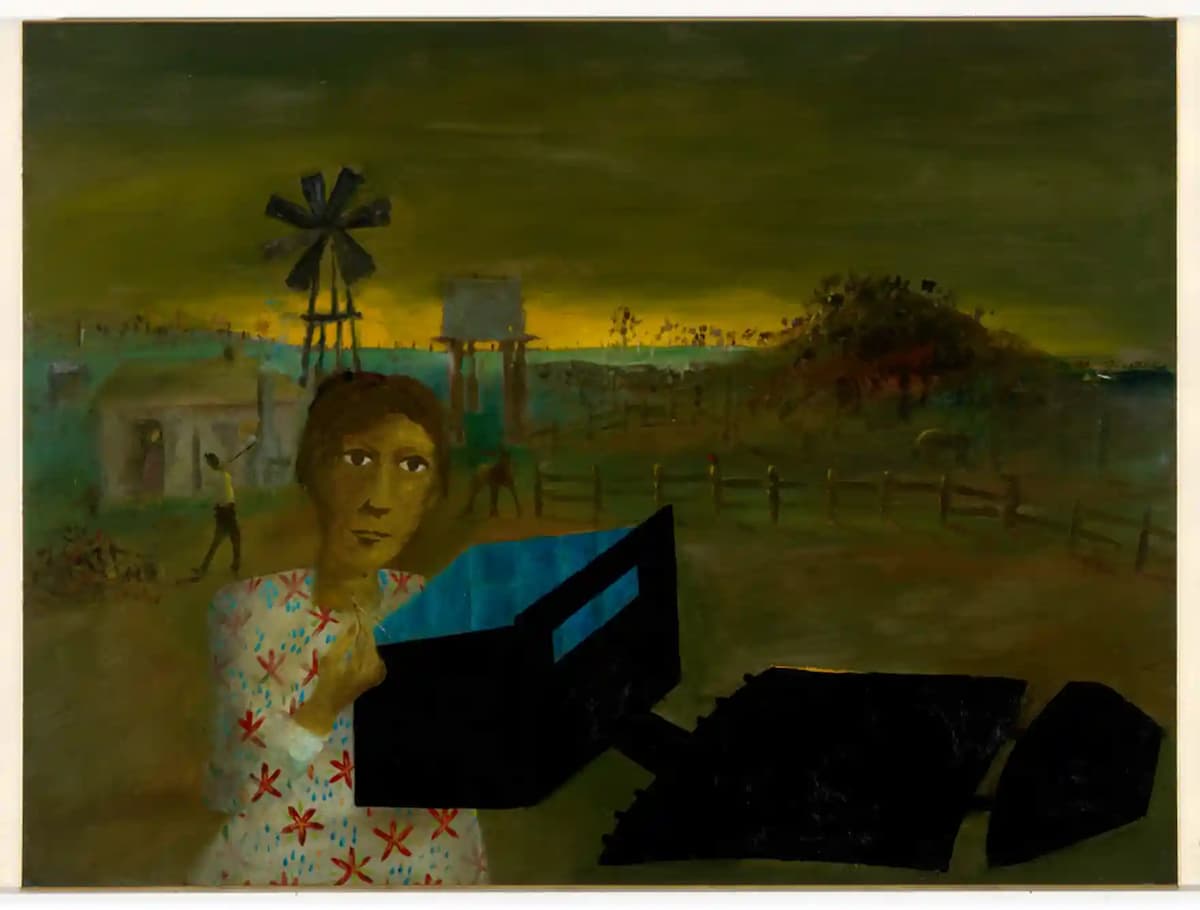 Have a look at more of Nolan’s Ned Kelly pictures

Here’s a video tour of more of the Nolan’s series.