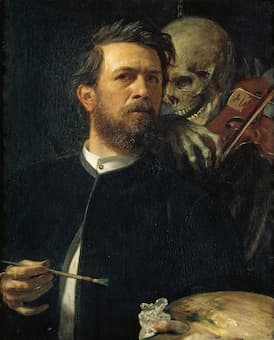 The Swiss symbolist painter Arnold Böcklin (1827-1901), who died 120 years ago, was a controversial figure during his lifetime. Considered one of the founders of Symbolism, and highly influential for the development of Surrealism, Böcklin achieved enormous fame in German-speaking lands. Born in Basel, some saw him as an important innovator. “Because this great painter was more than a porter, he was an interpreter and a poet of nature, an inventor. All impressions that his strong sensuality created were transformed into equally strong emotional moods, and the sound of them awakened new, unseen images in the mind’s eye of his imagination. 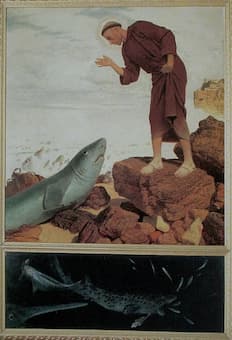 Others accused him of being a reactionary force, impeding progress in the arts. A critic wrote in 1947, “Böcklin’s work is one of the most consummate expressions of all that is now disliked about the latter half of the nineteenth century.” Böcklin grew up in an era of enormous social upheaval, and an aggressive shift towards excessive nationalism and rampant imperialism. Böcklin, like many of his contemporaries, “was first drawn to peaceful landscape painting and later to an over-compensatory ideal of ancient mythological art.” 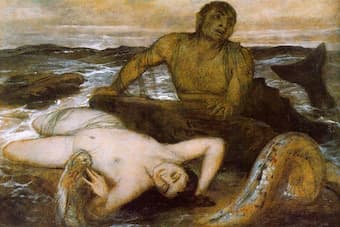 Böcklin looked upon antiquity as a “golden age in which man still lived in harmony with nature. It is the eclectic connection of mythical natural deities of antiquity with romantic landscape painting that showed him the way to symbolic expression.” To be sure, many contemporary saw Böcklin’s unconventional treatment of themes from antiquity as modern, although it was not always met with enthusiasm. Böcklin traveled restlessly, first studying in Antwerp and Brussels, and later working at the Louvre in Paris. 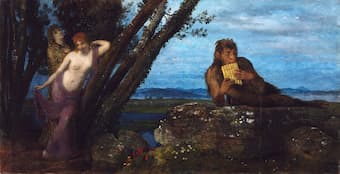 He spent several years in Rome, Munich, and Florence before settling in Zurich. Strongly influenced by Romanticism, Böcklin’s symbolist use of imagery derived from mythology and legend. Frequently overlapped with the aesthetic of the Pre-Raphaelites, his imaginative interpretations of the classical world allegorically explore death and mortality within the context of a strangely appealing fantasy world. 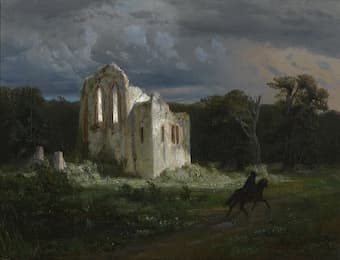 Based on his impressions of the fortress Castello Aragonese on the island of Ischia, Böcklin’s “Island of the Dead” is undoubtedly his most famous painting. He produced five versions on that theme, essentially showing a lonely island rising up in the dark sea to a mighty rock formation overgrown with cypress trees. A ferryman silently brings a person wrapped in a white cloth to the island of graves. Carved burial chambers are seen in the rock, and Böcklin “creates his own eternal grave… With its dark colors on the interior walls, absorbing the light, the painter achieved the true revival of the psychologically missing depth at the time of realism.” Böcklin wrote, “it should get so quiet that you get shocked when someone knocks on the door…You will be able to dream yourself into the dark world of shadows until you believe you can feel the soft, mild breath that ripples the sea; until you are afraid to disturb the solemn silence with a loud word.” 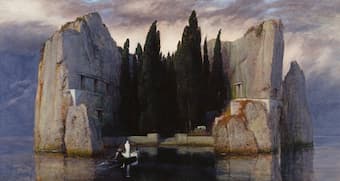 Böcklin’s art was met with almost rapturous veneration in the German-speaking lands at the turn of the century. That popularity rested primarily on his “Island of the Dead.” With this painting he “hit a contemporary nerve, and countless etchings soon became the basis of mass art prints, which triggered a veritable hype in the fin de siècle.” Böcklin exaggerated contemporary values and ideals by creating realistic portrayals veiled with deep allegorical symbolism. “The essential characteristic of symbolist art,” the manifesto of 1886 stated, “is to never conceptually fix an idea or to express it directly.” In addition, Böcklin’s enigmatic landscapes of the soul exerted a powerful influence on the following generations of Surrealist artists. It is hardly surprising that contemporary composers took up the images of Arnold Böcklin, and translated them into music. Among them was Max Reger, who fashioned 4 poems after Böcklin paintings. 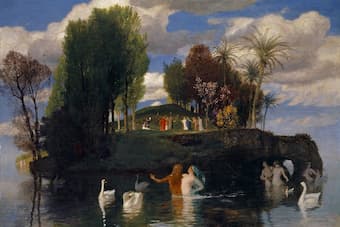 Arnold Böcklin: The island of life

Sergei Rachmaninoff first saw “The Isle of the Dead” in a black-and-white reproduction in Paris in 1907. “He was so haunted by this mysterious image, that he began to write music almost at once, without even waiting to see the full-color original.” The composer supports the pictorial and metaphorical aspects of the painting by splattering warm orchestral colors on an essentially somber palette. Böcklin complemented his “Island of Death” with his “Island of Life.” Swans are swimming in the water and mythical creatures in a relaxed mood playfully interacting on a densely overgrown island. Böcklin’s reputation in the second half of the 20th century was overshadowed by the admiration of Adolf Hitler, who possessed a grand total of 11 Böcklin paintings. In terms of art history, however, Böcklin has been described as “the link between impressionism and expressionism. He stood at the interface to modernism of the 20th century, and as a mirror of the social upheavals of that time.