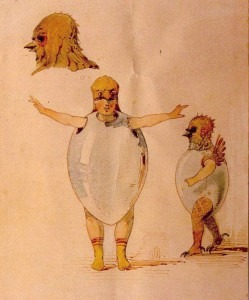 Viktor Hartmann: Sketch of unhatched chicks for the play Trilby.

We all know about Prokofiev’s Peter and the Wolf, Saint-Saëns’ Carnival of the Animals, and Schubert’s Trout, but what other animals lurk in the musical forests?

The first thing we find might be the most obvious – there are a lot of birds in music! In the second movement of Handel’s Organ Concerto No. 13, we have two competing birds, the cuckoo and the nightingale.

Handel: Organ Concerto No. 13 in F Major, HWV 295, “The Cuckoo and The Nightingale”: II. Allegro (Richard Egarr, organ; Academy of Ancient Music; Richard Egarr, cond.)
Grieg, in his many books of Lyric Pieces, covered a lot of folk music but also found time for a little feathered creature.

Grieg: Lyric Pieces, Book 3, Op. 43: No. 4. Smagfugl (Little Bird) (Einar Steen-Nokleberg, piano)
One of the most famous of bird pieces has to be the ballet for pre-nascent chickens that Mussorsky included in his Pictures at an Exhibition.

Mussorgsky: Pictures at an Exhibition: V. Ballet of the Chickens in their Shells (Buniatishvili, Kathia – piano)
Larger works from the 20th century that involve birds cover swans (Sibelius), larks (Vaughan Williams), and Delius celebration of the arrival of Spring with the cuckoo.

Sibelius’ Lemminkäinen Suite, Op. 22, had a rocky reception and the composer only permitted 2 of its 4 movements to be published. One of them, though, was The Swan of Tuonela, one of Sibelius’ masterpieces. Tuonela is the realm of the dead and the mystical swan sails around it. Leminkäinen is supposed to kill the swan with one arrow, but dies himself instead. The voice of the swan is taken by the cor anglais, contributing to the shadowy imagery of the tone poem.

Sibelius: Lemminkainen Suite, Op. 22: II. The Swan of Tuonela (Royal Stockholm Philharmonic; Andrew Davis, cond.)
The English poet Georg Meredith wrote a poem entitled The Lark Ascending and Ralph Vaughan Williams used lines from it as inspiration for his “pastoral romance.” It’s a glorious work, celebrating the effortless rise of the bird, seemingly lifted as much by his song as his wings.

Vaughan Williams: The Lark Ascending (Hilary Hahn, violin; London Symphony Orchestra; Colin Davis, cond.)
To bring us to Spring, it’s yet another bird, the cuckoo. Delius based his work on a Norwegian folk song (used by Grieg in his Op. 66) that the Australian composer Percy Grainger had told him about. The clarinet becomes the cuckoo – listen for its quiet entry around 02:40.