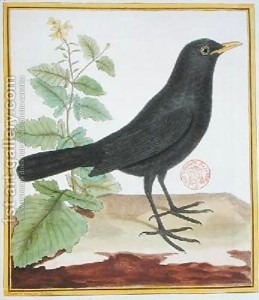 One of the most important modern composers to take up the ideas of birds and music was the French composer Olivier Messiaen. He had been fascinated with birds for a long time but it was only in 1952, when he was asked to write a piece for the Paris Conservatoire that he really took them up as a compositional inspiration.

The piece he wrote for the Paris Conservatoire was intended as a test piece for flautists trying for entry to the Conservatoire. Le merle noir (The Blackbird) has music derived from the actual song of the bird. Combined, however, with the very modern piano accompaniment, this piece of nature is turned into a piece of art.
Messiaen: Le merle noir (Patrick Gallois, flute; Lydia Wong, piano)
He extended this in 1953 with Reveil des Oiseaux (The Awakening of the Birds). This piece for piano and orchestra is made up entirely of the birdsong one might hear in a 12-hour span, midnight to noon, in the Jura, a small mountainous area on the France / Switzerland border. You have a real sense of him exploring the sounds of nature around him and bring that indoors as music.
Messiaen: Reveil des Oiseaux (Pierre-Laurent Aimard, piano; Cleveland Orchestra; Pierre Boulez, cond.)
This piece marked a significant point in Messiaen’s output as, from here on, bird song was incorporated into every piece he wrote. As his reputation as a composer grew, he travelled more and started to incorporate the songs of exotic birds, not just his local ones, into his repertoire.
Another composer, although from a much earlier period, who incorporated bird song was that indefatigable concerto composer, Antonio Vivaldi. We hear birds and dogs in his Four Seasons concertos and we also have his Flute Concerto named for the goldfinch.
Vivaldi: Flute Concerto in D Major, Op. 10, No. 3, RV 428: I. Allegro (Aurèle Nicolet, flute; I Musici)
However, birds in music are easy – a singing bird and a singing instrument are easily matched, even if the bird’s song is difficult to play. Other animals can be found all over the repertoire: Leroy Anderson wrote “The Walzing Cat,” Rossini wrote a hissing and spitting “Cat’s Duet,” and we can find a chorus imitating wandering sheep in Handel’s Messiah.
Handel: Messiah: Part II: All we like sheep have gone astray (Toronto Mendelssohn Choir; Toronto Symphony Orchestra ; Andrew Davis, -cond.)
In his 1948 work, At the Zoo, Russian composer German Galinin created a set of piano pieces for children that even included an elephant. It’s a bit heavy and slow, but then so is the elephant.
Galinin: At The Zoo: V. Elephant (Olga Solovieva, piano)
And to turn it all around, we have Nora, the piano cat, whose output was characterized by The Times of London as something halfway between Philip Glass and free jazz.