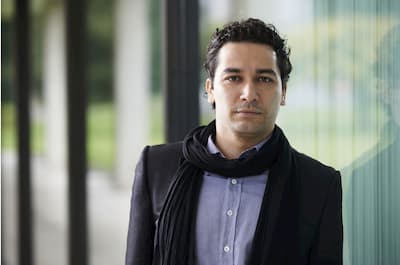 Andrés Orozco-Estrada is about to commence a five-year music directorship of the Vienna Symphony Orchestra, the city where he has lived for more than 23 years. Moving in 1997 from Colombia to study at the Vienna Hochschüle, Andrés made his base in Vienna and obtained his first big position there as principal conductor of the Tonkünstler Orchestra. Since then he has held positions in Texas (the Houston Symphony), Frankfurt (the Frankfurt Radio Symphony Orchestra) and London (the London Philharmonic), as well as having guest conductor spots with orchestras all over the world.

Andrés is greatly looking forward to this next step in his career, as he tells me: ‘I feel like this is the moment to explore being a more mature human being and musician. It’s a luxury to be a music director in the same city as you and your family, and I am so happy and thankful for that fact, but I also want to give all the experience and knowledge and all the things I’ve learned from the last years with an open mind, and try to make a great mix of this with the tradition and the high level of the Vienna Symphony.’

Vienna certainly is a city of tradition, but through his travels Andrés has developed a passion for presenting programmes in new ways to new audiences – perhaps something that will be essential as classical music emerges into the new post-covid world. 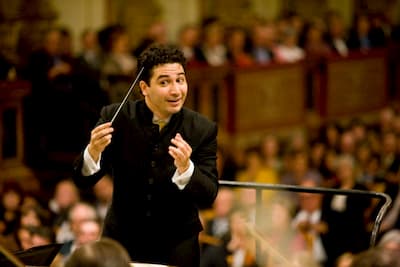 ‘I learned this from my experience in Houston,’ he says. ‘The audience appreciated so much whenever the conductor turned around and even just said ‘Hello, I’m happy to see you’. They appreciate this closeness, and even more so if the conductor says even more, about the music, about the composer, about the programme.

‘I explored this in America a couple of years ago and I was so happy with this reaction, and the key thing was how much more they were able to enjoy the music with a little more understanding. I’m talking about pieces by Lutosławski and Bartók, not necessarily easy repertoire, and they reacted perfectly fine and enjoyed the pieces because of the chat. I realised this is something that also our [European] audiences appreciate and might need too.

‘We’re not in the nineteenth century any more, people don’t know how many symphonies Beethoven wrote, times change and I think part of what we should be doing is being aware of these changes and try to adapt and do the best we can do. Not to wait; in the classical music world we are often the last to try different things. It’s about keeping these ideas and traditions alive but getting inspired and trying to incorporate this in different ways.’

In Vienna, where most concerts are sold out night after night, it could be argued that the audiences don’t need as much guidance, ‘but there are still people who are not so familiar and who want to get connected to the music. They just haven’t had the possibility yet to experience the orchestra in a more guided way, and that’s when I start to think ‘Let’s try and find new ways to programme that allow us to give these opportunities to these people.’

Andrés believes that the conductor plays a crucial role in this process and wants to explore new ways to programme repertoire. For this to happen, however, there must be an audience in the first place – and this takes time to rebuild following the pandemic.

‘The Salzburg festival started with an audience in June, just small concerts with 100 people’, Andrés tells me. ‘It’s so important to get back in the process with whatever kind of normality we find ourselves in, to start bringing people back into the concert halls. This takes time. 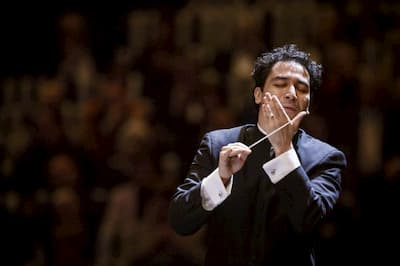 ‘When we started the season in Frankfurt, we had one-hour concerts which could hold about 500 people. Normally the concerts were almost always sold out [2500 seats]… but in the end we got about three or four hundred. In Vienna it’s not the case. Two weeks ago I visited a concert with 1000 people in the hall, but that’s because in June they started with 100.

‘They already had time to experience it and feel safe, but the audience needs to be there to get it and to understand, to feel it, and then they tell their friends. For that reason I can only suggest for however the situation is in different places, with whatever rules and regulations are in place, even if it’s just 10 people, 50 people, try to bring people in as soon as possible so they can communicate to others that the system works.’

Andrés’s appointment in Vienna marks the beginning of a five-year relationship with the Vienna Symphony Orchestra, a time where he can shape the sound of the orchestra and get to know the players and be part of the larger artistic process. How is this different from appearing as a guest conductor, where there are only a few days to meet the musicians and shape a programme?

‘There are so many factors that are part of this process, these decisions. On the one hand, when you have an appointment like in Vienna, with a contract for five years, you know you are going to develop a strong relationship and you are committed to that. You can develop bigger arcs, bigger phrases, you can plan cycles, and you are part of the process of hiring new musicians, new colleagues. During this time you are helping the orchestra, you are part of its growth and moving forward. It’s a responsibility but also a nice way to put your own mark on how the orchestra plays. You want to discover and create your own way to play and approach music – emotionally, technically, and more importantly, the sound.

There are no rules and no recipes, it’s just a human situation where everyone experiences something different. There is a difference between every character, every personality, and in my opinion this is a very crucial part of the success in a collaboration as a guest conductor: how the professional and human beings combine, how these two groups connect – or not. Sometimes it works very nicely, other times it’s just ok, other times it just doesn’t work. You never know, and it doesn’t mean that one or the other isn’t good enough, it’s just sometimes you’re not on the same page.’

Moving frequently between Frankfurt, London and Houston meant Andrés was encountering three very different orchestral styles, with differing attitudes and sounds. How does he adjust to such different groups?

‘It’s interesting but exhausting at times as well. You just get used to one and then the next week you have to move to another! But generally speaking it’s very interesting, it’s very inspiring, and it also gives you a very fresh perspective. The change helps. For now, I’m very lucky and happy to start moving into a different stage where I don’t have to guest conduct too much, instead just spending the time with my orchestras, still having some guest conducting here and there, but more trying to build stronger relationships and keep those connections present.’