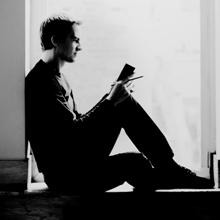 When I first began collaborating with Harmonia Mundi, a wonderful classical music label headquartered in the south of France, they sent me a batch of CDs, among which were several by the prominent young French pianist Alexandre Tharaud. I had never heard of him, though with pieces by Rameau, Satie, Debussy, Couperin, Chopin and Bach, he certainly offered an interesting repertoire. Just going by his CD covers however, I had my reservations. Could this handsome young man, with his boyish good looks, really tackle such a varied repertoire? Or was this yet another PR gimmick – packaging music with a pretty face? (To be fair, this is not Harmonia Mundi’s style at all.)

But you know what they say about judging a book by its cover. I duly chose a CD, and being an unqualified Bach fanatic, I started with the Italian concertos. And boy, am I glad I did, because his Bach surprised me, as did his Satie and Couperin, and Rameau as well. And then I encountered Alexandre live at a recital in Paris, and I was spellbound. His rendition of Scarlatti had me glued to my chair. He treated the audience to a Scarlatti that was beyond Scarlatti, and as his fingers bent the instrument to his tune, I became intensely curiously about the man behind the music.

Luckily for me, Alexandre was in Hong Kong last month, for his first visit to the city. He kindly agreed to an hour-long interview even with his busy schedule, which is how I found myself in the rehearsal room of the HK Sinfonietta, chatting with a soft-spoken, well-mannered and articulate artist who expresses himself the same way he plays the piano: with precision and elegant eloquence.

Alexandre’s story began like this: he started learning piano at the age of five. Unlike many other five-year-olds however, young Alexandre embraced the process of learning and practising with gusto. Discovering a desire to create, he also took extra lessons in composition and conducting. This passion continued into his teenage years even as the work became more demanding. But this only intensified Alexandre’s passion for the piano, and to this day he still describes it as his best friend.

What might strike some as odd is the fact that Alexandre doesn’t keep a piano at home; in fact, he hasn’t done so for the past 13 years. Instead, he practices at friends’ houses – a decision I can fully understand. After all, personal space holds all sorts of distractions. For the past six years, Alexandre has also been taking a one-month sabbatical each year, allowing him to step back from his audience to pause, reflect, absorb and plan. But one month is all he will allow himself, since too much introspection can sometimes create confusion – something we can all relate to, I think.

As an artist who lives and reflects on his craft, Alexandre remains connected to past, present and future. Even as he reflects on his last recording of the complete Beethoven Piano Concertos, he is preparing for his next project – a topic he prefers to remain mum on, although he promises a real surprise. Even now, he still wishes to revisit his old recordings from more than ten years ago. And when asked how he unwinds after performing, he replies, true to form, that he prepares his pieces for his next concert.

That’s not to say that Alexandre doesn’t have other interests aside from his music. He practices meditation and yoga, and loves photography. If you visit his website, you will find his photos at the link, ‘Carnet de Route’. Each photograph tells a different story and evokes a distinct emotion: curiosity, perhaps, or discovery, playfulness, aesthetic beauty, or loneliness… all open to interpretation and all distinct puzzle pieces that make up the man behind the music.

The Alexandre I met is a fascinating individual. Through Interlude, I have encountered musicians who have moved me to tears with their music but surprised me unhappily with their personality. This was not so with Alexandre, who revealed himself to be a determined and focused individual who is demanding with himself, yet at the same time open to exploration and new experiences. Underneath his poetic looks, he is a sensitive and attentive aesthete who is, at the heart of it, a musical force to be reckoned with.

I hope he will return to Hong Kong soon, and that you will get the chance to be swept away by his music, the way I was.