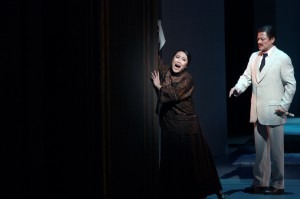 Hong Kong made history this month, hosting the world premiere of the former colony’s first homegrown grand opera, “Dr. Sun Yat-sen.” Not only is its namesake Cantonese; so were the composer, librettist, and much of the cast. Opera Hong Kong’s first-ever original commission, “Dr. Sun” was accompanied by the Hong Kong Chinese Orchestra, an ensemble of traditional instruments known for tackling contemporary works.

But by the time the curtain rose on Oct. 13, “Dr. Sun” was best known for offstage drama: a version with Western-style instruments was due to serve as world premiere in Beijing in September, but the performance was abruptly called off amid suspicions of censorship. The controversy raised Hong Kong’s profile in global music circles, which have often looked to mainland China’s booming growth in classical music to offset declining interest in the West. While China has played host to many international collaborations in opera and other musical genres, “Dr. Sun Yat-sen” was the biggest-ever original work to draw on non-mainland Chinese talent and tackle themes from Chinese history, fueling speculation that its Beijing cancellation was linked to Party sensitivities over the portrayal of historical events. Despite the withdrawal of the Hong Kong premiere’s sponsor, Swiss watchmaker Carl F. Bucherer, Opera Hong Kong’s board of directors and other supporters stuck with the production through opening night. Its premiere was an accomplishment; but the warm reception of such an unconventional work by Hong Kong audiences was a minor miracle. 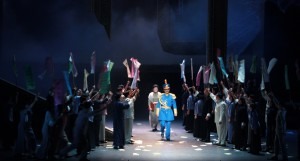 The opera itself gave few signs of artists spoiling for a fight. Chinese-born composer Huang Ruo, educated in America and based in New York, offered up a starkly modern score with repetitive motifs drawn from American minimalism and the Chinese musical idiom. It is challenging music and certainly not conventional crowd-pleasing fare; all the more surprising, then, that the Hong Kong audience gave Huang such hearty applause at the end. Huang’s score notates sections where the singers are meant to improvise a moment or two of Chinese opera-style vocal intonation, a tic that might be unfamiliar, but not unwelcome, to the Western ear.

The libretto, by Hong Kong playwright Candace Chong, focuses on Sun’s stormy private life with language that alternates between poetic phrases and vernacular Mandarin. “I felt it could have been more poetic and less colloquial overall,” said a local listener. “In Chinese opera, we are accustomed to hearing people speak ‘normally’ in a poetic way, and it might have sounded more beautiful without feeling unnatural to a Chinese audience.” It could even, she felt, have been sung entirely in Cantonese, instead of a single duet between Sun and his imminently-ex wife. Spoken English interludes, which support a plot device, interrupted the dramatic flow and could stand to be trimmed or dropped altogether.

The director was Chen Xinyi, a fixture of the Beijing arts establishment known for her productions of several grandiose “original operas” at Beijing’s National Center for the Performing Arts. She has spent little time outside the mainland’s artistic circles, and it showed: scenes involving crowds and revolutionary fervor barely departed from agitprop clichés. One onstage character’s “thumbs-up” gesture in response to a tender romantic scene would have been more appropriate endorsing instant noodles, and two assassins’ exaggerated, weapons-wielding walk across the stage evoked Elmer Fudd amid serious historical drama. Someone should have told Chen that only Catholics make the sign of the cross, not the Protestants in whose circles the Sun traveled.

Besides a garish Sgt. Pepper’s-style outfit for Sun in Act III, costumes and sets did their job cleanly and superbly.

Act I got off to a shaky start, its slightly overblown music adjusting with difficulty to changes in emotional temperature. Act II, which depicts Sun’s growing affection for Soong Ching-ling while exiled in Japan, contains several standout moments of emotional intensity. Act III, a montage of revolutionary ferment and personal reconciliation, was widely felt to be the strongest, and points to the opera’s future potential as a repertory work if earlier acts are tightened and tweaked. All told, there was nothing wrong that could not be fixed through judicious cuts, except perhaps parts of Act I.

For a new opera premiering under adverse circumstances, “Dr. Sun Yat-sen” compared favorably to recent outings operatic outings drawn from Chinese tales and talent, notably Tan Dun’s “First Emperor” and the Stewart Wallace’s “The Bonesetter’s Daughter”. Like New York, Hong Kong’s strong financial industry can support major artistic experiments, while the territory’s freedoms continue to give haven to interpretations of Chinese history and identity beyond Beijing’s orthodoxies. For the novelty, scandal, and music alike, this was an experiment well worth watching, and repeating.