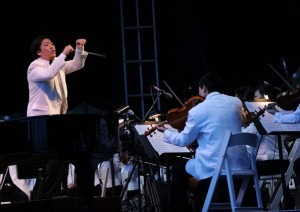 Amid all the talk of China’s growing appetite for classical music, there are now concrete examples of just how promising this scene is.

The New York Philharmonic recently signed an agreement with the Shanghai Symphony Orchestra to collaborate on a new orchestral training institute in Shanghai. The agreement also includes a series of touring exchanges and joint commissions of new works.


Set to launch in 2013 with the opening of a new concert hall for the Shanghai Symphony, the training institute will provide graduate-level music instruction for 20 to 30 students. Every two to three months, New York Philharmonic musicians and staff will travel to Shanghai to present master classes and other intensive instructional sessions. Musicians in the programme, which will operate in the new concert hall, will also study with and occasionally perform alongside members of the Shanghai Symphony.

The education partnership will be part of a larger exchange between New York and Shanghai that will entail touring as well as co-commissions. The latter have already begun to take shape. One Sweet Morning, a song cycle by John Corigliano, premieres in New York on September 30 before debuting months later in Shanghai on May 26. Officials hinted that future commissions will bring new Chinese works to New York.

“The idea is to bridge the gap in training,” explains a spokesperson of CAMI, the Shanghai Symphony’s touring agency. “The Chinese system is modelled on the Russian system, which doesn’t really train people to be orchestral musicians. You’re groomed to be a soloist.” This strikes me as a very nice way to say that everybody tries to be a shining star and not a team player. A bulletin on the Shanghai government website notes that the partnership gives the Shanghai Symphony “more opportunities to perform on the international stage and gain experiences to become a world-class orchestra.”

The two orchestras’ plan follows the Lincoln Center’s recent announcement in New York that it will partner with a Chinese performing arts company to build a multimillion-dollar performing arts centre in Tianjin. The arts centre will be located in a currently undeveloped, remote harbour area. But this is a typical Chinese development these days: we build a city out of nothing and call it something grand like Rome, and then we wait for the Romans to come. Many may not yet have realised that this huge arts centre is under construction and due to open in 2012. According to the design plan, it will be even bigger than the National Centre for the Performing Arts in Beijing.

We Chinese are widely seen as ambitiously expanding our cultural influence and promoting artistic exchanges around the world. First there were the 2008 Beijing Olympics, then the Shanghai World Expo in 2010, then the endless construction of new venues.

I often have negative feelings towards the music industry, but this is news I can cheer to. However, questions may yet linger as to the scope, timing and financial implications of these plans. I only hope that our musicians and their management teams really benefit from these collaborations. Through agreements like this, more and more young musicians can learn about the spirit of creating good music rather than just the technical aspects of the craft. Most importantly, I hope that the officers and managers aren’t motivated by notions of fame and that they have the best of intentions as they embark on these most encouraging collaborations.