Composers Anecdotes
Songs from a Century Ago
by Maureen Buja August 5th, 2014 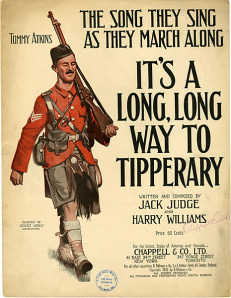 We went to a concert the other day of songs from WWI – popular tunes for a war that started a hundred years ago. What surprised us was how familiar some of the tunes were. Songs such as George M. Cohan’s ‘Over There,’ although written for WWI, still carried resonance for WWII and even through the Gulf War – its lack of specificity for the locale of ‘over there’ made it a good recruiting song for a number of military occasions.

To return to the concert we attended, the song that attracted our attention was not militaristic, and, in fact, was written in 1912 for the music hall and not for the war at all. The subject was a poor Irishman in England, defending the idea of his home town against the attractions from London, and noting, at the same time, the distance to his beloved. Ah yes, it’s a Long Long Way to Tipperary.

As was common with many music hall songs of the time, the songs is anti-Irish, and the lyrics make fun of poor Paddy’s pride in his home town, in his lack of ability to spell (it’s the fault of the pen), and how he’s summoned home when his girlfriend threatens to marry someone else.

When the British Army Irish regiment the Connaught Rangers marched into France, however, they took this song with them. After a correspondent from the Daily Mail reported it being sung by the Rangers as they went through Boulogne, the song was quickly picked up by other British army units. As with most songs, the verses get lost (or changed to reflect local circumstances) and it’s the chorus that lives on:

Songs change their meaning due to the circumstances where they appear. On an English music hall stage, the comic trope of the Irishman longing for what he’s left behind and what he’ll lose if he doesn’t get back there makes its audience roar with laughter. On the battlefield, the song has a different resonance: it may be a long way to Tipperary, but it’s what the soldiers keep in their heart as they fight for both home and the ‘sweetest girl I know.’