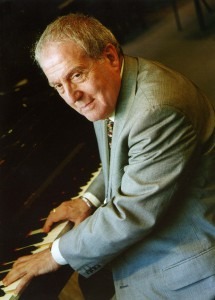 Aldo Ciccolini (15 August 1925, Naples, Italy; 1 February 2015, Asnières-sur-Seine, France) brought the world of Satie out of obscurity and showed his quirky qualities to a new generation of listeners. Ciccolini, who was born in Italy but made his name through his work in France and through promoting French composers.

Satie’s music responds to a precise playing and Cicciolini provides that, for example, in this performance of Satie’s Gymnopedies:

Satie: 3 Gymnopedies, No. 1. Lent et douloureux (Aldo Ciccolini)
In this recording of the first of the Gymnopedies, he plays slowly and deliberately, taking the tempo description of ‘Lent et douloureux’ (slow and sorrowful) fully into account in his performance. He makes you hear the work anew, no longer tied to advertising or dance images, but now as a work of its own, expressing the ritual Greek games of the title.

Although the French repertoire focused around Satie was his own niche, he also recorded the keyboard works of Rossini, still scarcely known, and did complete sonata cycles by Beethoven and Mozart. He won the Diapason d’Or in 1993 for his Debussy recording, in 2002 for his recording of the complete solo piano works of Janácek and Schumann, and in 2003 for his recording of Chopin’s Nocturnes.

His honours came from both Italy and France and included Accademico di Santa Cecilia, Officier de la Légion d’Honneur, Ordre National du Mérite, Commandeur des Arts et Lettres, and the Gold Medal of Art and Culture from the president of the Italian Republic.

The majority of his recordings appeared on EMI, but lately, he had begun to record for the new French label La Dolce Volta, the latest of which (2013) was a recording of 13 waltzes by 13 composers: the French represented through Satie, Chabrier, and Fauré, and others, joined by European composers, including Chopin, Grieg, Schubert, and Sibelius.

Satie: Je te veux (Aldo Ciccolini)
One notable LDV recording, made in 2011, returned him to Mozart, where he said “I understand Mozart now”.

Mozart: Piano Sonata No. 11 in A Major, K. 331: III. Alla turca: Allegretto (Aldo Ciccolini)
Again, in playing familiar material, he makes us hear it again: in the Rondo alla turca, the contrasts between the various themes pull us into the world of Mozart and the wonder of the new Turkish sounds.

As a student of Marguerite Long and Alfred Cortot, he represented the height of 20th century French pianism and his pupils, including Yves Thibaudet, Marie-Joseph Jude, and Nicholas Angelich carry on that tradition.