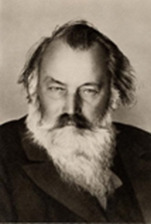 Brahms in his sixties

With his widely recognised achievements as a pianist, composer and conductor, Brahms had succeeded in amassing a considerable fortune: 4000.000 marks from his compositions, earnings wisely invested by his publisher. It was also due to a frugal life: he dined in cheap restaurants, and his old overcoat was held together by a large safety pin. As for his estate, which would worth many millions of dollars today, was mainly bequested to the Society of the Friends of Music in Vienna.

Brahms had always remembered his humble beginning and often spoke of “the real people … who occupy the cheapest seats in the theater”. He had a single housekeeper who cleaned and cooked for him. His apartment was said to be a mess, except for his music scores, which he always knew their exact locations. During World War II, his house was hit. His piano, supposed to be kept for posterity in Vienna, was also destroyed.

In 1878, Brahms travelled to Italy at the age of 45. It was just 17 years after the Italian unification and the birth of the Republic, a country that was still wrecked (even in our days) by political and social chaos. Yet, he returned there eight times and one has to ask why? (Especially after we’ve found out his reluctance to travel) In addition to the Italian sun, the Italian dolcezza, and the pasta, were there any other attractions? Music? Love affairs? Or just his great love of the outdoors (where he often enjoyed taking long walks by himself when composing new works)?

Most of his musical output was composed after he left Hamburg, including his chamber music, symphonies, huge number of vocal compositions for choir, lieders and his requiem. He once said “It is not hard to compose, but what is fabulously hard is to leave the superfluous notes under the table.”

In spite of his world-wide recognition in his native city, Hamburg never offered him the position of conductor of the Philharmonic Orchestra; this job went to the much forgotten Julius Stockhousen. 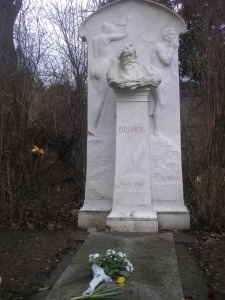 The double concerto for violin, cello and orchestra, as well as his clarinet sonata and quintet were composed in his late years (1887 and 1894 respectively), dedicated to the famous clarinetist Richard Mühlfeld of the Meiningen Orchestra.

Brahms: Double Concerto for Violin and Cello in A Minor, Op. 102
Brahms loved women although he never married. Clara Schumann was his lifetime paramour, with whom he played and for whom he composed. He had numerous other affairs and was once engaged to Agathe von Siebold in Göttingen in 1854 (when she was 21 years old).

Johannes Brahms and Clara were correspondents for over 44 years. Clara Schumann, as well as Robert Schumann considered Brahms a genius composer, only second to Beethoven. They said and wrote this repeatedly that “his music was a novel overture on the musical horizon.” Brahms appeared with Clara Schumann in many concerts in Germany, Austria and Holland, yet no picture of them being together was ever found. Brahms was said to have burnt all the letters of Clara — “I destroyed Clara’s letters for the same reason I burnt my sketches”. Clara’s devotion to Brahms’ music was shown by her frequent performances throughout her busy career. This was once again the reaffirmation on what Robert Schumann had said shortly before his untimely death.

As for Brahms, he held Bach and Beethoven in great veneration, although he was also inspired by the music of Schubert and Schumann. As for his own music, Brahms had inspired the whole generation of composers: Mahler, Reger, Elgar, Busoni, and even Schönberg.

Clara Schumann died in 1896. One year and two weeks later, Brahms was dead of pancreatic cancer. It was an unforgiving disease at that time, and was considered by many medical authorities to be caused by grief and depression. In his family, none of the Brahms had any children, so the Brahms lineage ended with the composer’s death in 1897.

Although the city of Hamburg has never given Brahms the positions that he coveted — conductor of the Philharmonic, it made him an honorary citizen and ordered all ships to moor in the port, carrying their flags at half-mast on his death. Brahms would have said “too little, too late.”

Today, Brahms’ music is played in almost every music hall in the world. From the remote Ural conservatories, to the most prestigious American and European festivals, as well as many hundreds and thousands of private conservatories in China, one can surely listen to his masterpieces.

Brahms was buried in Vienna. Yet, he is also much respected and remembered in his native city: the main orchestra hall “Laeiszhalle” is situated in the Johannes Brahms Platz. His statue, now a major attraction, is in the hall of “Laeiszhalle”. There is a Brahms Museum, where a charming hostess will explain to you in German and English about everything I have forgotten to ask. Every year, the city holds a Brahms Festival in his name. The German Requiem is sang in November at the St. Michael Church, where he was baptized. He is for sure a musical gem that Hamburg learns to treasure all the time.

This program is geared for adult musicians who have played the piano, a string instrument or have been singing and have achieved a degree of excellence but have turned successfully to another career.

They have kept a passion for the instrument or the voice, continue to performe and are interested in getting coaching from all our famous professors and also to appear in public.

Participants are lodged in five star hotel Palazzo Brufani, with a gastronomic breakfast and have at their disposition an excellent air-conditioned hall with a coda piano in the hotel.