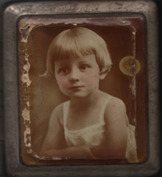 We had already talked about the young Johannes’ performances around the city in the last sharing. As a handsome and energetic youth, he was already composing his first piano concerto (after a short stint as an arranger for opera-potpourris).

The First Piano Concerto was played by him in public in 1848, at the age of 15 (contested). It is more likely that the première of the first concerto was in 1859, and his second one in 1881. For his 22 years of hard labour? He must have thrown away or burnt a lot of his drafts.

How many pianists who are playing that extraordinary composition are aware that it was written by a youngster in short pants at 15? (He had already improvised a sonata at the age of 11.)

House in Hamburg where Brahms was born

Brahms’ genius was recognized early; he was introduced to Liszt in Weimar when he was 20 years old by Joseph Joachim, the major violinist of the 19th century, with whom he kept a life-long friendship. Yet, it was not a happy meeting; although Liszt admired and played Brahms’ Op. 4 Scherzo at sight, Brahms fell asleep when Liszt played his own composition.

Brahms: Scherzo in E-Flat Minor, Op. 4
Shortly afterwards, he was presented by Hans von Bülow, one of the major musical powerbrokers of the 19th century (also a negligible composer and conductor) to the Schumann couple in Düsseldorf.

This meeting opened a new chapter in the musical and social life of Brahms: Robert Schumann would later publish an article (Neue Bahnen) predicting that Brahms “will give ideal expression to the times ‘the most significant talent of the day… a young eagle, the true apostle.’”

Throughout his life time, Brahms had endless veneration for the old master. He was obsessed by this predicament, often saying that he felt not up to the standards Schumann had set for him.

How about Schumann’s wife? In fact, Brahms’ dedication and passion to Clara Schumann (14 years his senior), as well as their musical and amorous relationship were all recorded in musical history. 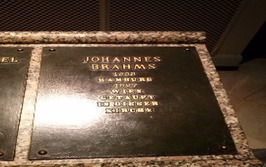 Brahms Baptism Plaque inside the church

There were few or even no psychological analysis about the similar age gap between his mother and father, and between Brahms and Clara Schumann. Though in later days, Freundians should be delighted in dissecting such a rich subject.

In 1856, after Robert Schumann’s death in a lunatic asylum in Endenich, Clara Wieck Schumann was left fending for herself. She was known to post flyers for her recitals on her own while she was pregnant with her 8th child!

Brahms ran to Clara’s assistance and moved to Dortmund in an apartment above the Schumann’s abode. Some speculated that during this time they had an amorous relationship — “I think I am in love with her,” he wrote to Joachim at that time.

He also wrote to Clara:

In the following years, Brahms filled in some menial jobs: Choir Master and piano teacher at the court of Leopold III, Prince of Lippe in Detmold and Hamburg.

After his mother’s death, the father remarried but was always in need of money… Brahms asked him to look over one of his compositions he left in Hamburg: His father did so and was rewarded; the pages of the manuscript were stuffed with large banknotes.

He was also generous with composers whom he liked: “he put pressure on his own publisher to bring out the works of Dvořák, who was then a young struggling composer.”

Neither his mother’s death, nor his financially frustrating years living in modest to miserable quarters affected his genius composing creativity. At that time, he had written chamber music, choral works, lieders, and was working on his piano concerti.

In 1871, he moved to Vienna, and became the choral director of two important musical societies. At the age of 38, he was finally financially secure. By the end of the year, he could rent a decent apartment at Karlgasse 4, and remained there until the end of his life.

Brahms mainly worked on his compositions during the idyllic summer vacations in Bad Ischl, Wiesbaden, Lake Thun, and Baden-Baden. He mostly spent his vacation close to Germanic locations since he only spoke German, and disliked travelling. He had once refused to travel to England to receive an Honorary doctorate at Cambridge, and had never travelled to America in spite of a fantasist narrative of his life by a writer as purported by Jeffrey Dane.

During the concert seasons after 1870, he was already in great demand as a pianist and conductor. He performed many of his music, mostly in Vienna to an increasingly adoring public. Just like his vacations, he limited his musical activities to the German-speaking countries: Austria-Hungary, Germany, German-speaking zones in Switzerland and Holland.

After 1875, he no longer accepted any formal music positions and commissions. Although his works were labelled as “old fashioned” by the protagonists of the “New German School”, comprised mainly Liszt and Wagner, Brahms was still the reigning Musician of the European Music World.

His musical heritage was huge — four symphonies, two piano concerti, a violin concerto, a double concerto for violin and cello, 250 lieders, many chamber music works, multiple theme and variations works, including the Paganini Variations, Variations on a theme by Haydn, Variations and fugues on a theme by Handel, and of course, the German Requiem. Some of his small scale compositions had become “best-seller mondial”, such as the Hungarian Dances, the Liebeslieder Waltzes for vocal quartet and piano, and the famous “Brahms Lullaby” (Wiegenlied op. 49 no. 4).

One hundred years ago, there was mostly classical music in concert halls (what a blessing!). Brahms conducted the première of many of his works with the Meiningen court orchestra. Often invited to be guest of many aristocratic gatherings, he was often gruff, unpleasant, shy and uncommunicative. My guess: the genius was upset about wasting his precious time in useless small talks, he was burning with impatience to return back to compose in his modest apartment.

Apparently, although being recognised as a successful maestro, Brahms’ personal friendships were not well developed. He spent most of life alone. How about Clara? We’ll continue next time to discover the anecdotes during the last days of Brahms.

This program is geared for adult musicians who have played the piano, a string instrument or have been singing and have achieved a degree of excellence but have turned successfully to another career.

They have kept a passion for the instrument or the voice, continue to performe and are interested in getting coaching from all our famous professors and also to appear in public.

Participants are lodged in five star hotel Palazzo Brufani, with a gastronomic breakfast and have at their disposition an excellent air-conditioned hall with a coda piano in the hotel.