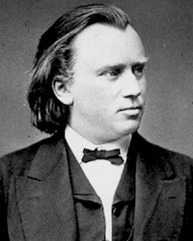 Hamburg, a Hanseatic city of 1.8 million inhabitants, previously a free city-state. It is part of the Hanseatic chain of ports, sitting on the Baltic Sea. (along with Lübeck, Antwerp, Bergen, Novgorod and London by extension)

Before the modern advent of trains and automobiles, the city was a citadel of maritime commerce, a vital pillar of transportation.

During the World War II, Hamburg was almost annihilated. Today, it is entirely reconstructed. This busy hub of commerce is dotted with parks, high and low rises, museums and remembrance houses; also the home of a great number of past géants and classical musicians.

Here is the Komponisten Quarter, which hosted Telemann and C. P. E. Bach, the kapel maister of five churches, including the major St. Michael church. Fanny and Felix Mendelssohn were also born here in a family of wealthy bankers, who then moved soon to Berlin.

Of course, Johannes Brahms is one of the most important figures. The Brahms House (Johannes- Brahms – Gesellschaft Hamburg), situated at Peterstrase 39 Hamburg, has stored over 300 books about the maestro. In fact, by 1922, 23 volumes of correspondences, as well as eight volumes of biography by his friend and music critic Max Albeck were published.

Brahms’ music has always been a gem for my wife, pianist Ilana Vered. This recent visit to his birthplace has inspired the re-discovery of his own history. If you go to the internet and starts researching about his life, compositions, travels, and performances, you would probably be confused by the large amount of controversial material; some were even fraudulent. In the coming sharing, Brahms’ musical life would be explored, from the short researches done in our Hamburg trip, and some more clues from his music, pictures and correspondences.

Let’s begin with Brahms’ early childhood and his family. Born in the Gängeviertel quarter in 1833, Brahms spent his early life around the neighbourhood. He got baptized in the famous St. Michael’s Church. In 1892, a fire burnt down his home. It was restructured thereafter, but got destroyed by bombing during World War II again.

Brahms’ father was originally an artisan. After leaving his natal German town of Heide, he began to pursue his passion as a contrabass player. Later, he married Johanna Henrika Christiane, who was 17 years older than him. Christiane was also a multi-talented musician, said to walk with a limp because of her shorter leg. She became a seamstress to supplement the family income.

Brahms had a younger brother, Fritz, who also became a pianist eventually. Yet, he led an unhappy life, bearing the nickname as “the wrong Brahms”. His younger sister Elisabeth died when he reached the maturity of his career as a hugely successful composer. Brahms has dedicated his Rhapsodies, Op. 79 to Elisabeth.

Brahms: 2 Rhapsodies, Op. 79
Compared to his family, the young Johannes apparently has more luck! He got his first musical training from his father, who coached him the violin, horn and cello. At the age of seven, he was introduced to Otto Cossel to study piano. He had his first public performance at ten. This seems terribly slow today when youngsters in China are playing the Rachmaninoff Concerto at the age of six.

Afterwards, he was admitted to the local private school of Friedrich Hoffmann, studying piano and theory with Eduard Marxsen (whose teacher was a pupil of Mozart). For a brief period, young Johannes also studied the cello. Yet his study was cut short, as his professor ran away with Brahms’ cello.

At the same time, because of the family’s poverty, he began performing on the piano in restaurants and private functions around the city. It is said that his father had sent him to play the piano in local brothels, which might explain his later indulgences in visiting prostitution houses. Although these claims were argued by some critics, the often quoted libertine house visits and multiple amorous relationships of Brahms might serve as evidences. Indeed, Brahms has never settled in a marriage in a time when being celibate was frowned upon.

Brahms has established different relationships with some of the most important music figures throughout his musical journey (though some were not on good terms). Stay in tune to discover the rise of Brahms as a successful composer in the next chapter.