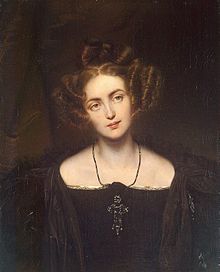 Henriette Sontag (1806-1854) was an operatic soprano of international renown. No other than Hector Berlioz wrote the following glowing critique, “She unites all the qualities we like to find in an artist: sweetness never surpassed, agility almost fabulous, expression, and the most perfect intonation. On she carols, higher and higher, like a lark at heaven’s gate, so soft, so clear, so wonderfully distinct that, like the silver bell from the altar, it is heard through the pealing organ. But her principal merit, in our eyes, is the absence of rant—the substitute of genius—in any shape whatever. She always SINGS, and does not depend on mere strength of lungs—erroneously called power. She never strains her delicate organ—that sweet instrument so susceptible of every shade of expression.” And you might already know that she was the soprano soloist in the first performances of
Beethoven’s 9th Symphony and his Missa Solemnis. 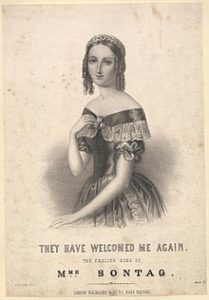 Apparently, at the beginning of her career, Sontag was hissed off the Vienna stage by supporters of her rival, Amelia Steininger. Many years later, and at the height of her fame, Sontag was riding through Berlin when she saw a little girl leading a blind woman down the streets. Touched by the woman’s helplessness, Sontag asked the child whom she was leading by the hand. “That’s my mother,” the little girl said, “Her name is Amelia Steininger and she used to be a great singer, but lost her voice. And then she cried so much about it that now she can’t see anymore.” Sontag asked for their address and told the child, “Tell your mother an old acquaintance will call on her this afternoon.” As such, Sontag met her old rival and even hired a skilled oculist who tried to restore the woman’s sight. Regrettably, the procedure was not successful so Sontag gave a benefit concert for Amelia Steininger the very next week.