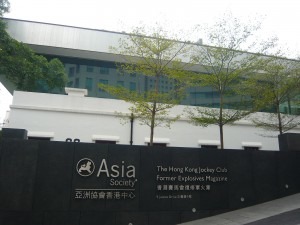 A mere 15 years ago, Hong Kong proudly escaped the shackles of British colonial rule and happily pledged its allegiance to an even more aggressive ruler in the north. There were no cries for independence or democracy, no calls for an uprising or spring of any kind but simply an unspoken assumption that colonial practices are more easily digestible if administered by ethnically related brethrens. And the new rulers — having established a local puppet — went to work with the impetuousness of a new lover trying to eradicate all memories of a former rival. Under the dubious guise of progress and urban development, historical buildings and structures were indiscriminately razed to the ground and replaced with something as socially valuable as carriageways and public lavatories. For one reason or another, it never entered into consciousness that the conveyance of heritage is not exclusively tied to the structure of a given edifice, but relies heavily on the spaces it commanded and the places for social activity it defined. Maybe our fearless leaders were too busy digging private underground structures or hunting for retirement properties on the Mainland to notice that our small gambling neighbor to the West had — at least in and around the city center — found a satisfying architectural way of linking the present with the past. By placing the newest McDonald’s eatery and Starbuck’s coffee outlet within the arched pathways and ornate columns of its own historical and architectural ancestry, the buildings not only radiate a shared reciprocal heritage, they also continue to delineate the public spaces that have charmed visitors for centuries. In Hong Kong, until recently, these links between the present and the past were defined by a couple of postcard icons of transportation and a civil service apparatus that was already outdated by the time the dinosaurs walked the earth. I did say until recently, because with the opening of the Asia Society Hong Kong Center, things have changed considerably. Not surprisingly, our hard-working government had nothing to do with this project whatsoever, as the entire endeavor was exclusively conceived and implemented by the Asia Society, a non-profit and non-governmental organization. Relying on private donations and on the generosity of its membership, the Asia Society transformed a former British military structure into the premiere exhibition, gallery and small ensemble performance space in all of Hong Kong. Retaining the outlines, and in many cases the actual structures of this former explosives magazine and compounds, the Hong Kong Center — with its embedded secret gardens exuding a sense of unexpected rural tranquility, gently rising and dimly lit translucent pathways, riparian installations that provide visual as well as aural accents, with artists and the public gathering to share in exhibitions or making music while overlooking the glittering modernity of Admiralty — finally provides a tangible, living and breathing link to Hong Kong’s past. 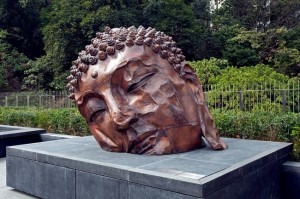 Among various festivities that introduced the Asia Society Hong Kong Center to the public, up-and-coming Hong Kong Artists gathered in the Miller Theatre (formerly known as Magazine B) for a premier performance entitled “Hong Kong Epilogue (Here are the years that walk between). Commissioned by the Octavian Society, composer Aenon Jia-en Loo enlisted the support of videographer Silas Fong and engaged the Hong Kong New Music Ensemble together with Yuki Ip for an artistic rendering of the urban landscape that at one time or another served each one of them as home. Relying on texts from a variety of sources, Aenon Loo summoned a kaleidoscope of musical styles drawn from popular mediums, theatrical conventions and current musical approaches. Archival footage, visual effects and a self-conducting Yuki Ip attempted more or less successfully to support this musical plurality. Yet for whatever reasons, this interdisciplinary and postmodern smorgasbord merely managed to convey a sense of sentimental nostalgia, located between fragmentary remembrances and invented memories. In terms of the musical score, this was somewhat surprising, as audiences in Hong Kong have long valued Aenon Loo’s compositions for their critical and often uncompromising ways of expression. As a matter of fact, it was the unyielding nature of his creativity that helped him to garner selected scholarships for overseas study in the first place. The process of getting his Doctor of Musical Arts in composition and electronic music from Columbia University in New York apparently turned him into yet another pale conservatory composer. Although his music might be considered to be more palatable for public consumption, and he is sure to get some kind of appointment soon, the “Hong Kong Epilogue” was simply a loose collection of student exercises. Anybody hoping to gleam additional insights into the creative and performing processes in a post-concert discussion session was equally disappointed. Although these sessions are capable of narrowing the conceptual and practical gap between artists and listeners, they only works if the artists themselves have something to say, or at least are capable of articulating and responding to queries from the audience. Hong Kong has given Aenon Loo the opportunity to critically examine the mechanisms that allowed him to have an artistic voice in the first place — to mediate between his early days in Kuala Lumpur and his latest excursion to the United States — and we shall look forward to the day when this simple fact will become part of his artistic vocabulary. With the Hong Kong Center, the Asia Society has finally given us an exhibition and performance venue that favorably compares to a select handful of sites around the world. It remains to be seen whether the “Rising Stars of Asia Series,” undoubtedly referencing the aforementioned modes of historical transportation and implying some promotional connection with an educational institution overseas, will be able to do it justice.