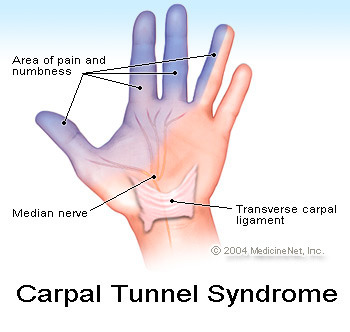 Injuries among musicians occur mainly due to overuse. Repetition, excessive force, poor posture, awkward positions, and little respite from our wonderful profession when stirred into the mix, is a recipe for disaster. Half of the injuries seen in musicians are muscle/tendon overuse injuries. Other injuries that may occur include nerve entrapment injuries such as carpal tunnel syndrome.

Who among us has not heard of carpal tunnel syndrome (CTS)? It has become the malady of the twenty-first century – the computer user’s malady. CTS is common in non-musicians as well as instrumental musicians.

Stravinsky: The Rite of Spring – Dance of the Earth
Chopin: Waltz in D major, op. 64 “Minute”
The flexor tendons are fibrous bands that attach the flexor muscles to the elbow and finger bones. The flexor muscles and tendons bend the fingers. The median nerve is a long nerve originating in the neck. It travels all the way down the arm into the hand. Nine tendons and membranes including the flexor tendons and the median nerve must pass through the narrow tunnel at the wrist called the carpal tunnel. When the fingers move, the tendons slide against each other. If the tendon becomes inflamed or swollen, the median nerve can become compressed. Numbness and hand pain results.

Place your right hand fingers at the base of your left hand at the wrist. Now wiggle your fingers. You can feel the tendons sliding against the tunnel. Too much finger movement and exaggerated wrist positions such as extension, deviation, flexion, grabbing, or squeezing the thumb can easily irritate the carpal tunnel. Before the advent of the computer (if we can remember that far back) 60 words a minute was considered adequate for a good typist at the ancient beast, the typewriter. At that pace if we do the math, the tendons slide against the wall 18,000 per hour, and over a six-hour day it adds up to a stunning 108,000 slides. Why do we computer addicts have a significantly higher incidence of carpal tunnel when pressing computer keys down is so easy? Typists had to stop to change the computer ribbon or change the paper. They had to get up from their desks to consult files or colleagues. Today everything, including email and chatting is right at our fingertips. No pause or break in the work is necessary. That has taken a toll. 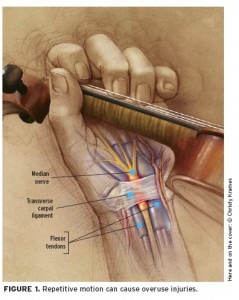 For musicians, the statistic is even more astounding. We set the metronome to sixty (one second) and easily play thirty-second notes, (eight notes), which equals 960 notes, almost twice as many repetitions. Neurologists calculate that we humans are capable of doing thirty-eight repetitions is three seconds.

Rite of Spring by Igor Stravinsky was once considered unplayable. It created a riot at its debut. The Danse de la Terre section has 360 notes in about thirty-five seconds. Friends of mine doubted me. “That’s impossible,” they said. Not one to renege on this challenge, I decided to prove it to them. I set up the Stravinsky on our DVD player and then I proceeded to play the cello part along with it. My friends timed me and watched in amazement. I did it, though not without sweating!

Shostakovich’s mesmerizing Symphony No. 11 the “1905” has forty-four bars of continuous trill passages for the strings player’s left hand, the fingers going back and forth as quickly as they can for six minutes strait!

For pianists, the famous Waltz in D major, op 64 the “Minute Waltz” requires similar feats of repetition totaling 688 right hand notes, not including the decorative mordents and trills. Again impressive at twelve notes per second! Wind and brass players are not immune. Grabbing sticks can be a contributing factor for percussionists. All this repetition especially combined with poor hand position can result in carpal tunnel syndrome.

What can we do to prevent CTS?

* Avoid pressing non-playing fingers, pressing with your thumbs and reaching for notes.

* Avoid dropping, deviating or raising wrists. Keep them fluid and as neutral as possible.

*Avoid slamming your fingers down. Focus on up action and release. Use the least force necessary.

*Avoid getting stuck on a difficult passage. It is better to come back to them later in the day rather than tax the same muscles in one practice period.

Like the median nerve, the ulnar nerve originates in the neck and extends down the arm all the way to the hands and fingers. The ulnar nerve has to pass though a tunnel at the elbow called the cubital tunnel. The nerve can be compressed here when the arm is bent (and what instrument does not require a bent elbow?) The ulnar nerve may become inflamed from prolonged or repetitive elbow bending or flexion. To avoid ulnar nerve entrapment take time to allow your arms to hang down and rest. Avoid direct pressure on your elbows. Avoid prolonged handwriting and use Bluetooth or a headset when you are on the phone.

Numbness, pain and muscle weakness is a red flag especially if the symptoms seem worse at night. See a qualified professional to avoid nerve damage and analyze your playing to prevent a chronic scenario.


“This is an excerpt from Playing (Less) Hurt by Janet Horvath, published by Hal Leonard Books”