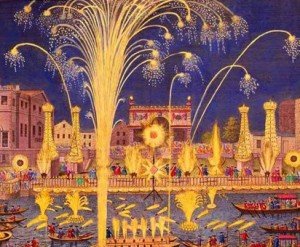 What do you get when you mix sulfur, charcoal and potassium nitrate? If you have taken rudimentary classes in chemistry, you know that it is the chemical formula for gunpowder, aka black powder. Although it was first described in an 11th century Song dynasty text, knowledge of this explosive compound had been around for a while. It powered everything from fire arrows to bombs, and it certainly was a hit when the technology reached Europe. Fireworks, as a natural application of gunpowder, were invented in ancient China to scare away evil spirits and bring about luck and happiness. Even today, at important events and festivities like the Chinese New Year and the Mid-Autumn festival—and in fact for all kinds of celebrations around the word—fireworks are still de rigueur. 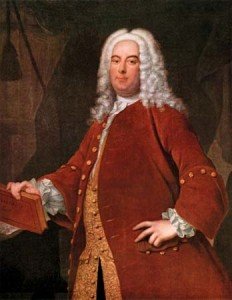 When Chinoiserie gripped Europe around the mid-17th century, Chinese fireworks became all the rage. Treatises were written and diagrams drawn to cover the recreational and ceremonial uses of fireworks. And in 1748, Europe definitely had something to celebrate! In that year, the Treaty of Aix-la-Chapelle settled the “War of Austrian Succession”—basically an 8-year tussle over the question whether Maria Theresa—a woman, was eligible to take over the Habsburg thrones of her father, Charles VI. And since King George II of Great Britain was in the mood to celebrate, he ordered for a gargantuan festival to be held on 27 April 1749. That festival included a lavish Royal fireworks display erupting from a massive machine constructed in Green Park. The king put John Montagu, the 2nd Duke of Montagu in charge of the fireworks, and told his court composer George Frideric Handel to write some background music. 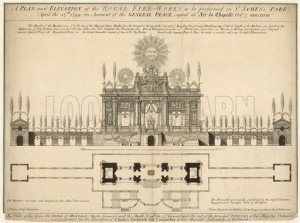 A plan and elevation of the Royal Fireworks to be performed in St James’s Park, 27 April 1749

Handel quickly set to work, and just as quickly got into an argument with John Montagu. Handel wanted to include violins, but was told in no uncertain terms that the King only wanted to hear wind instruments and drums. Initially, Handel relented but eventually he had the last laugh as he later rescored the work for indoor performance, incorporating strings into the orchestra. When the music was first rehearsed at Vauxhall Gardens, 12,000 paying customers rushed the premises to get a first listening to the Music for the Royal Fireworks. Handel’s “Suite”—a collection of characteristic dances—makes ample reference to the political nature of the occasion. The third movement, “Largo alla siciliana” is subtitled “La Paix” (Peace), while movement 4 carries the title “La Réjouissance” (Rejoice) in gleeful celebration of the signing of the Peace Treaty. On the day of the firework, the musicians were seated in a special building constructed by the theatre designer Giovanni Niccolo Servandoni. And as expected, Italian artists were in charge of the decorations as well.

On the fireworks side, captain Thomas Desaguliers was the chief fire master, and the fireworks themselves were designed and controlled by the Bolognese artists Gaetana Ruggieri and Giuseppe Sarti. Citizens from all corners of the kingdom arrived in London to witness the spectacle, yet despite an enormous amount of preparation, nobody had actually considered the possibility of bad weather. Naturally, it rained heavily and most of the fireworks refused to light. A few did manage to clear the ground, but in the process set part of the stage and the right pavilion on fire! We have no official reaction of what Handel thought of it all, but Horace Walpole reports, that it was a “pitiful and ill-conducted evening,” but “very little mischief was done, and but two persons killed.” Now that’s what I call a party!

George Frideric Handel: Music for the Royal Fireworks, “Minuet I and II”