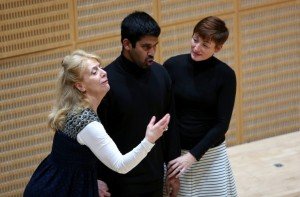 The Summer of 2014 proved to be a wholly exciting and life changing time for Darwin Leonard Prakash, a young Indian boy living in New Delhi who has a fascination with the human voice and the Western idiom of singing classical music as he heard from TV and radio.

Dr Robert Alderson, a well known and highly respected English singing teacher with a formidable reputation for recognising and developing vocal talent in the “not so obvious young” was invited to give vocal master classes in New Delhi during the summer of 2014. The May 2002 edition of the Spectator Magazine comments:

“…it is highly unusual to find someone with the acute ear of Robert Alderson, he was responsible for encouraging a whole generation of singers now making successful careers at English National Opera”

It was during the last week of Dr Alderson’s visit that young Darwin went along with some of his friends to watch the classes. After the class had ended, Darwin along with his friends were outside singing and generally having a good time when Dr Alderson singled Darwin out and asked him why he wasn’t singing in the classes. Darwin told him that he would never have been asked to be included as he wouldn’t have thought himself good enough! There are some very nice young voices here in India but Dr Alderson rang me that evening and he was so excited about this young, untrained baritone! He said to me that this boy’s voice could be trained and his God given instrument, his innate musicality, intelligence and burning passion are of international potential. I was simply taken aback because I’d never even heard of Darwin, nor a mention from anyone. I would say everyone here was shocked that Darwin was so singled out.

For the rest of Dr Alderson’s visit he gave Darwin a lesson every morning at 7am for an hour. During this 2014 visit, Dr Robert and I became firm friends as we share similar views on the teaching of young singers. The day after a couple of lessons with Darwin, Dr Robert brought a video recording of them to show me. I was truly amazed, not only by the beauty of the voice and the musical way in which it moves, but amazed that it had gone unnoticed and that I was unaware of it.

As Dr Alderson was shortly to leave India he asked me to look after Darwin, teach him and introduce him to Italian and German language through the Aria Antique singing book and simple lieder. It was also important that I contacted Darwin’s parents to discuss the situation and receive their permission for Dr Alderson to make plans in the UK for an intense period of private education with him in Manchester prior being presented to the Royal Academy of Music in London for a full scholarship.

It was December 2014 that a young and excited Darwin Leonard Prakash first arrived in Manchester to follow his dream to be an opera singer. Everything was arranged for him. His was to live in the house of Dr Alderson and food would be provided. Friends took Darwin shopping to buy winter clothing for him. A great friend of Dr Alderson’s family with a passion for opera gave him a small monthly allowance in order that he would have money in his pocket and ever since she has continued to help Darwin’s finances in no small way. As a singer-teacher and one who loves to help young singers myself, I would like to personally thank all these kind people who are helping our young Indian opera singer to achieve his dream. Thank you! 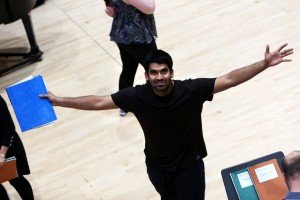 The day after Darwin arrived, he embarked on an intensive daily period of study with Dr Alderson. Apart from singing lessons, of which he had four a week, he was also learning rudiments of music, rhythm, notation, aural awareness, the history of vocal music and the various genders from Baroque to present day. It was also arranged that he had lessons on keyboard awareness with a Manchester based piano teacher who gave him her time and expertise free gratis.

Dr Alderson told me that Darwin “soaked up all this information like a sponge and that he had rarely had such a clever, bright and intelligent student coupled with such a prodigious vocal talent”. I understood this myself when I was working with him prior to his going to England. He’s very special.

In February 2015, after only three months tuition in Manchester, Dr Alderson arranged for Darwin to apply for the 2015 Glyndebourne Opera Education training course for outstanding young vocal talents. His audition was successful and he took part in the course that summer. Darwin has subsequently been awarded the Gus Christie prize for his work on the course. Mary King, the director of the course wrote of Darwin:

“Well Robert, he is quite extraordinary. He took everything that we could throw at him – text, language, movement – quite astonishing power, drama and commitment” 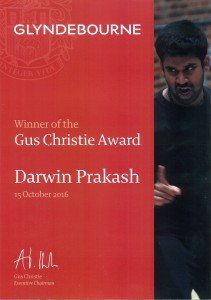 In April 2015, after only a period of five months study in Manchester, Dr Robert took Darwin to the Royal Academy of Music to sing for Professor Mark Wildman, the Head of Vocal Studies there who absolutely concurred with his colleague Dr Alderson as to the quality and potential of Darwin’s voice. Professor Wildman immediately organised a scholarship board to hear Darwin and he was immediately offered a full scholarship to study on the one year Post Graduate Vocal course. Recently he auditioned for the two year Masters in Opera course at RAM and has been awarded a full scholarship which included funding for the course and his living in London. Darwin tells me that he loves every minute he spends in the Academy and that everything is beyond his dreams. 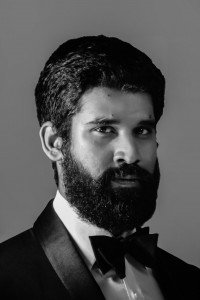 Darwin has recently returned from Mumbai where he was invited to be one of the guest soloists in the reopening of the Royal Opera House. He made a great impression on all who heard him and work aside him. His voice has developed into a most beautiful, rich toned elegant lyric baritone of excellent range and compass.

Now, having returned to London, Darwin is back perusing his studies at the Royal Academy of Music.

How the rest of Darwin’s story continues is now over to the profession and the world of opera as to how they welcome our young Indian prodigy into their midst.

By Situ Singh Buehler
This Article first appeared on Serenade Magazine on January 10, 2017.