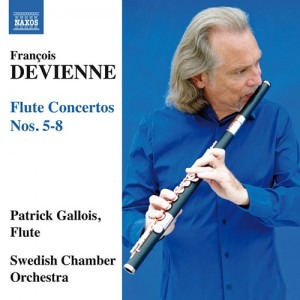 Flute Concerto No. 6 in D Major
I. Allegro

Devienne: Flute Concerto No. 6 in D Major – I. Allegro

French composer François Devienne enjoyed great esteem with his successful operas in the Revolutionary years of 1792–97, but it was as a composer for wind instruments that he has won his place in musical history. The four Flute Concertos in volume 2 of the complete set show a combination of melodic elegance and graceful virtuosity that characterises much of his work. Especially notable in this respect is No. 6 in D major, a compositional tour de force, rich in thematic material and panache, and one of the finest wind concertos of its epoch.