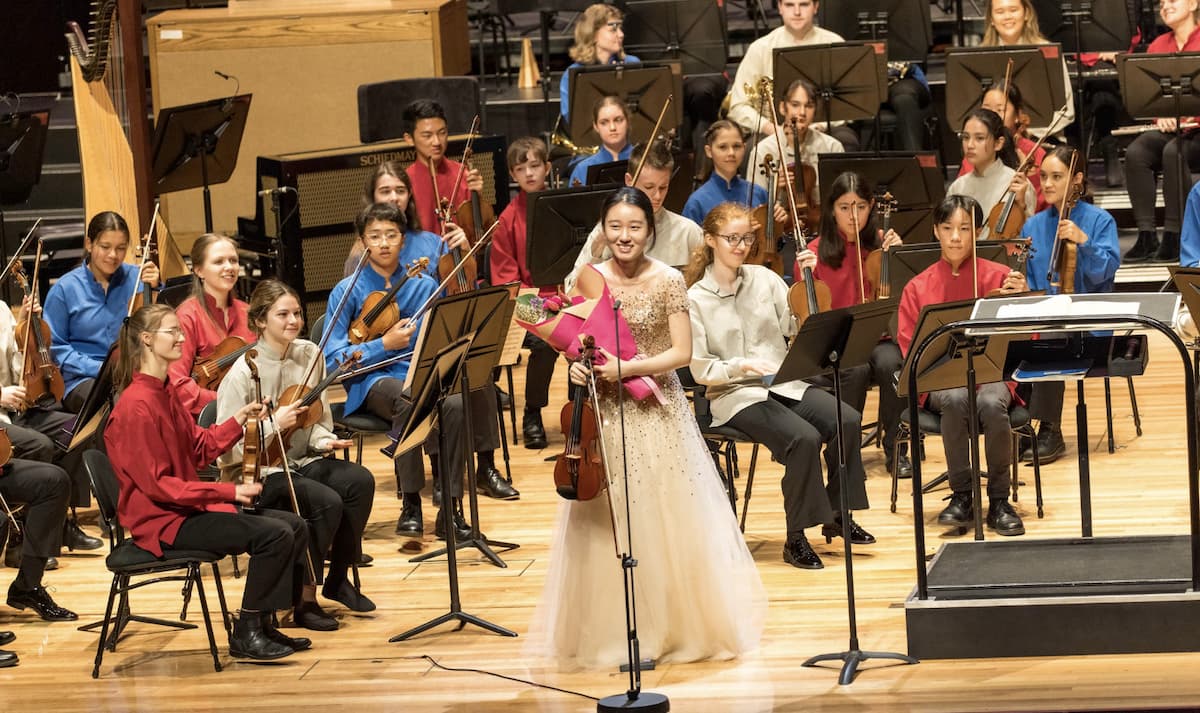 When you glance out at an orchestra during a concert, what do you see? Bows moving up and down in (hopefully) perfect unison? Eyes moving between music stand and conductor? Wind players breathing and moving together? These are all things you could expect to see in a performance, but how about shouts of “well done” after a big solo, or orchestra members laughing out loud when things don’t go to plan?

Obviously very little from the performers, if anything at all, is verbalised during a concert (unless you wake an audience member up from a mid-concert nap prompting them to scream out loud, sending everyone into fits of laughter). Nonetheless, musicians have subtle ways of communicating wordlessly with each other while performing.

The orchestral repertoire is full of prominent solos for every instrument, along with exposed passages for different sections of the orchestra: bits of the music considered awkward or tricky, difficult to pull off. All of this can make for a fairly high-pressure performance environment. How then, do musicians congratulate each other following a successful solo? Obviously wooping and cheering is (sadly) off the cards but zoom in and you may notice something more subtle taking place.

It is not uncommon for orchestral musicians to shuffle their feet after a particularly good solo ends. It’s a way of acknowledging the good job someone’s done without disrupting the music too much. Some groups get even more creative: an orchestra I freelance with, following the florid, lavish harp cadenza at the beginning of Tchaikovsky’s Waltz of the Flowers, shuffle their feet in time to the following waltz, which always generates a chuckle. In some rehearsals the shuffling on beats 2 and 3 of the bar is so loud you sometimes can’t hear who’s actually supposed to be playing!

In rehearsals shuffling is plentiful, but is obviously toned down in concerts – you don’t want to hear a beautiful solo immediately followed by what sounds like an army of floor-sweepers swishing across the stage – but look carefully and you might spot it.

This clarinet solo from Brahms’ Third Symphony, for example, would be followed by a subtle foot shuffle from fellow colleagues.

Congratulations don’t just come in the form of shuffling feet: musicians can also wiggle their fingers, tap their hands on their legs or subtly shuffle their instrument around to communicate a ‘well done’. Many of these things go unnoticed by audience members as they are so subtle, but while playing, our ears (and eyes) are receptive to everything around us – so even the subtlest cues are normally picked up on.

What happens, though, when something goes less than to plan? Well, similar actions are employed, and it’s often the context that dictates the meaning. If a player misses an entry or comes in at the wrong time, a little foot shuffle is like a little chuckle that yep, sorry, we all noticed. Mostly this is done in good humour – things very rarely go noticeably wrong in an orchestra, so when something does go awry, it’s more amusing than concerning.

Man sneezes into his trombone during concert

The plot starts to thicken when the same action means a different thing depending on where it’s happening. I discovered that for my American colleagues, sticking your foot out is a positive sign, meaning ‘well done’, whereas here in the UK it’s used to acknowledge a mistake.

This, plus the fact that any action can theoretically be done in an ironic way makes things fairly confusing. “So, wait, he’s wiggling his foot, but I thought it went well. Does that mean I played it badly and he’s laughing at me, or that I played it well and he agrees? Or do I just think I played it well but actually it was terrible?”

It’s easy to go down a rabbit hole with this kind of thing, but by and large, it’s fairly simple: we have little tricks to communicate with each other when words aren’t appropriate. It’s a nice way to stay in touch with your colleagues during a performance and feel like part of a team. Playing exposed solos can feel stressful and a little isolating, but a little foot shuffle afterwards reminds you that we all play towards the same goal and that we all share a strong mutual respect. Either that or everyone hated it…argh…