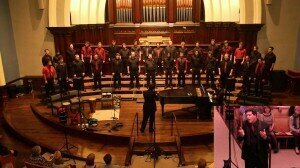 The United States of America (the India that Christopher Columbus thought he reached) and the real India lie on diametrically opposite sides of the globe; noon here, midnight there. The two lands only had sporadic contact in the distant past. But with America’s rise as a nation and the burgeoning of merchant shipping, trade between the countries developed. Then passenger ships facilitated the journeys of visitors and settlers.

But it was not until commercial air travel took off in the twentieth century that America properly encountered India, her culture, her music, her religious beliefs, her cuisine, and all other things Indian. America’s serious acquaintance with and acceptance of Indian classical music began in the late 1950s through musicians such as the sitar maestro Ravi Shankar, the sarod virtuoso Ali Akbar Khan and the tabla master, Alla Rakha.

These artists belonged to the Hindustani school of Indian classical music. Eventually, musicians from the other school, Carnatic, toured America and Europe, and musicians and audiences in the West became familiar with both the musical styles. The audiences weren’t always drawn from the elite; battalions of long-haired shabbily-attired hippies swayed and rocked and gyrated to Ravi Shankar’s dazzling performance at Woodstock in 1969.

Familiarity brought out the differences between Western and Indian classical music. Indian music was monotonic, based on ragas, musical scales comprising of specific notes, which the musician played, moving up (aarohana) and down (avarohana) the scale. Western music was polyphonic, based on harmony where the melody was played simultaneously with other notes that formed chords. The other main component of Indian music was the tala, or measure of rhythm; the closest Western music equivalent would be the meter. In the West, there was great emphasis on the quality of tone, free from harshness or nasal and chesty sounds; in India, quality did not matter as much as accuracy of pitch and dexterity in the production of tones, especially when done rapidly without compromising on precision.

The roots of Indian classical music can be traced to a treatise called Natya-Shastra by Bharata (dated between 200 BCE to 200 CE) which dealt with instrumental music, drama, and dance as artistic entities that intertwined to make a whole.

The split of classical music into the Hindustani and Carnatic schools probably culminated around the 16th century CE, the divergence beginning with the Muslim conquest of India which brought along with it the influence of Persian and other Islamic music. But the Muslims never vanquished the kingdoms of southern India, so the music there evolved without such external compulsions. The Hindustani style is prevalent over Northern India, Pakistan, Bangladesh and to an extent, Nepal and Afghanistan. Carnatic music extends over Southern India and the Tamil-speaking regions of Sri Lanka.

But over the years, the two schools have influenced each other – it is not as though from each is barricaded from the other.

Among the many American musicians who studied Indian classical music is Ethan Sperry, Professor of Music and Director of Choral Activities, Portland State University, Oregon, and Artistic Director and Conductor, Oregon Repertory Singers. He grew up in an artistic family: his father was a tenor singer, his mother a sculptor. Though Americans invariably think of Ravi Shankar and Hindustani music when they hear the term “Indian Classical Music,” Sperry chose the road less taken and studied Carnatic music. He said: “I got a grant from to travel to Mumbai (Bombay) and Chennai (Madras) to study Indian music. After some studying of Indian music theory (mostly Carnatic) and attending a lot of concerts, including many children’s concerts, which really helped me grasp how the theory was put into practice, I decided to try a purely choral arrangement of the music.” 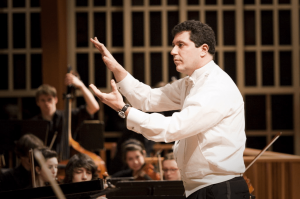 But here was the snag: India has no choral tradition as its music is based on melody, not harmony. There are no ensembles, and the ones you might unearth sing in unison, not harmony. Would such a transplant between widely differing traditions be at all possible? Would it not expose the musician-innovator to accusations of turning a tradition into a travesty?

Sperry addressed that issue thus: “I learned from my father (who is also a musician) that great music is great because it captures some essential human feeling or experience and brings it to life. Our goal as musicians is to make a personal connection with that spark in the music and share it with others. You have to be willing to be vulnerable to do this.”

Sperry then elaborated on his experiments: “I got my start as an arranger singing a cappella in college. In this style we give all the instrumental parts to the voices and use the voice to try and imitate their sounds. I decided to try this same idea on an Indian raga. I chose the raga Ramkali because it strays so far from Western scales. I decided to improvise on the raga as if I were singing the piece and write down my best ideas. Then I did the same thing for the vocal parts, trying to use syllables that would make them sound like the Indian percussion and drone instruments that usually accompany a singer.”

“Ramkali,” Ethan’s Sperry’s first composition transferring an Indian raga into Western choral format. This recording is from a later date, but Sperry himself is conducting.

Sperry’s willingness to take risks notwithstanding, the challenge facing him was tortuous, tricky and daunting. His adaptation of Ramkali was a male chorus piece (tenor and bass) but now he turned his attention to a complete four-part harmony adaptation.
(To be continued)

By Vishwas Gaitonde
This Article first appeared on Serenade Magazine on May 20th, 2018.