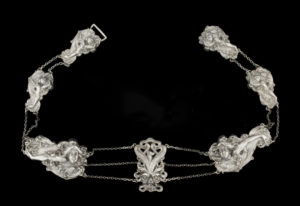 We were visiting the Richmond Museum of Fine Arts the other week and noticed two wonderful pieces of particular musical interest. In the Museum’s extensive holdings of silver items, we found two pieces commemorating operas by Richard Wagner.

A sterling silver belt and buckle made in Newark, New Jersey, was based on the opening of Wagner’s mighty Ring Cycle: the Rhinemaidens are depicted in their watery home. 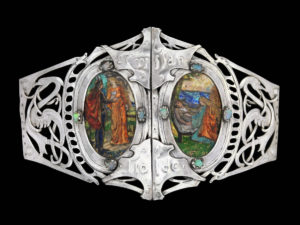 The artist is unknown, but the piece was made by William B. Kerr & Co., around 1900. The piece is 2 9/16 × 26 1/4 in. (6.51 × 66.68 cm) in size. Because this was produced in New Jersey, we’re assuming an American Wagnerite who would have seen Das Rheingold at the Met. The opera made its United States premiere at the Met in January 1889, with 11 productions that season. That production was the start of the first Ring Cycle in the Western hemisphere. 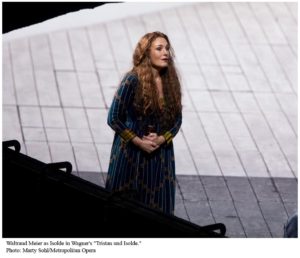 Another silver piece based on a Wagner opera was another belt buckle, this one on the tragedy of Tristan und Isolde. In the two-part piece, made of nickel silver, the left side shows Isolde accepting the fatal cup, seeming to receive it from Tristan, that contains not poison but a love potion that turns out to be equally fatal. On the right, Isolde kneels beside the dead Tristan. The frames of the two images are set with opals and the two lovers’ names are worked into the design as part of the clasp. On the sides are two archaic swans, done the style of decoration for medieval manuscripts. 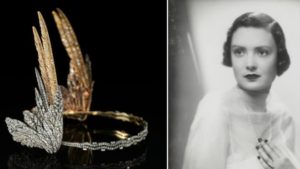 Roxburghe Valkyrie tiara (Cartier, 1935) and the Duchess of Roxburghe 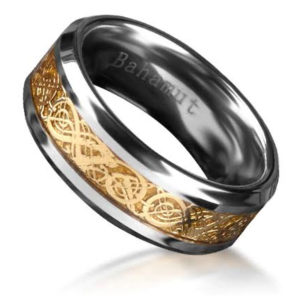 Ring of the Nibelungen

The artist, Alexander Fisher, Hon ARCA (1864-1936), worked in a variety of arts fields as a sculptor, enameller, silversmith, and metal worker, and in this buckle, his work as a silversmith and enameller came together a work of great beauty.

The Paris jeweler extraordinaire Cartier created two Valkyrie pieces, one in 1899 as an aigrette headpiece, i.e., to hold an egret’s feather, and another in 1935 to represent the winged helmet of the Valkyries. The 1935 tiara, created for the Duchess of Roxburghe, held the wings on little springs so that they would vibrate slightly when worn.

There’s other Wagner opera jewelry out in the world – we found, for example, a Ring of the Nibelungen available through AliExpress, though now, unfortunately, out of stock. Perhaps an inquiry with the Rhine maidens is in order? And, it should be pure gold, of course, although this one substitutes tungsten.

The French jeweler Lalique is currently collaborating with the Opéra National de Paris on several jewelry pieces based on operas and ballets, include pieces for Eurydice, picturing the snake that bit her and caused her descent to Hades, and for Stravinsky’s Firebird.