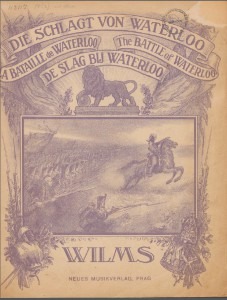 We’ve been looking at how the decisive battle of Waterloo in June 1815 was the inspiration for many composers. Beethoven’s program work Weillington’s Victory is probably the one work that still remains in the repertoire, albeit more as an embarrassment at Beethoven’s literal adherence to the sound of the day. It’s a disjunct for us because we think of Beethoven as the solitary iconoclast rather than an opportunist pandering to the public taste.

The Dutch composer Johann Wilhelm Wilms (1772-1847) was a prominent Dutch musician who took up the Waterloo theme in a piano work entitled “De Slag bij Waterloo” (The Battle of Waterloo).

The sheet music depicts the charge by British forces, but what’s more interesting is how Wilms has carefully annotated each section of music to show what action he’s set to music. The opening Marche is annotated with “Die Aliirten Armeen unter Wellington and Blücher ziehen sich zusammen” (The Allied Armies under Wellington and Blücher gather). The following Allegro begins with “Die Franzosen unter Napoleon rücken an” (The French under Napoleon move) and closes with “Tambours schlage Allarm” (The drums beat Alarm). The next section, Allegreo con fuoco, simply says “Schlacht” (Battle). After the battle, there is a Lamentabile section “Das Wehklagen der Verwundeten” (The Lamentations of the Wounded) followed by three sections of national song. The English sing “God Save the King,” The Dutch sing “Wilhelmus van Nassouw,” and the Prussians sing “Der König rief, und Alle, Alle kamen. The work closes with a waltz. The score may be found here.

The Scottish composer Nathanial Gow (1763–1831), son of the Scottish violinist Niel Gow, visited the topic with his The Waterloo Strathspey and Reel, although in the Scottish pipe recordings, his name has now been suppressed.

The Battle of Waterloo – Killiecrankie – Scotland the Brave The Rowan Tree (Stonehaven Pipe Band )
We’ve been looking at Waterloo commemorative music by composers who were alive at the time of the monumental battle. The battle continues to inspire even in the 20th century, as we see in this 1952 work by French composer Jacques Castérède (1966-2014): 3 fanfares pour les proclamations de Napoléon.

Jacques Castérède: 3 fanfares pour les proclamations de Napoléon: No. 3. 18 Juin 1815: Bataille de Waterloo. (Randolph Del Lago, narrator; Avatar Brass Ensemble; Lowell Graham, Conductor)
And, to close, we can look at how the metaphor for Waterloo as a place for utter defeat and triumph carried Sweden through to their first victory at the Eurovision Song Contest in 1974.