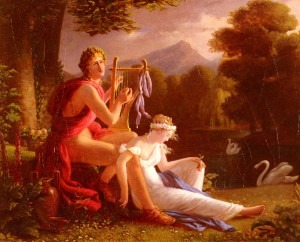 In general, weddings tend to be rather happy occasions. This was certainly true, at least initially, for Orfeo and Euridice. The master musician and the most radiant beauty of the ancient world were passionately in love. But on the wedding day a messenger brings the news that while gathering flowers, Euridice has received a fatal snakebite. Unable to deal with his grief, Orfeo—who could hold wild beats spellbound with his songs—declares that he will descend into the Underworld and persuade King Plutone to allow Euridice to return to life. After charming the ferryman and Plutone’s wife Proserpina, the king agrees under that condition that Orfeo must not look back at Euridice, “as a single glance will condemn him to eternal loss.” As we all know, Orfeo does look around and Euridice begins to fade away.

Claudio Monteverdi: L’Orfeo
Elektra is widely considered the most psychologically advanced Greek tragedy. The Greek dramatist Sophocles constructed a play that centers on the heroine’s obsession to avenge her father’s murder. Elektra lives in hope that her brother Orest would eventually return to slay their murdering mother and her lover. Richard Strauss set this timeless story of pathological hatred, self-perpetuating violence and sexual aberration to music. George Bernard Shaw asked, “Is there anywhere such an atmosphere of malignant and cancerous evil as we get here? Strauss apparently replied, “When a mother is slain on stage, do they expect me to write a violin concerto?” Although there are plenty of violent deaths to choose from, it was the final scene of Elektra dancing herself to death that horrified onlookers and audiences alike.

Richard Strauss: Elektra
There is nothing more dramatic and terrifying in operatic literature than the mass execution of nuns in Poulenc’s opera Dialogues of the Carmelites. Set during the French Revolution and the subsequent “Reign of Terror,” Poulenc’s meditation on death, faith and martyrdom follows the tragic fate of the nuns of the Carmelite convent. With their church and sanctuary desecrated, and refusing to renounce their vocation, the nuns are walked in procession to the guillotine. The chilling sound of the guillotine’s descending blade is heard repeatedly over the orchestra as one nun after another is executed. Chanting the Marian hymn “Salve Regina,” they blissfully enter into the kingdom of heaven.

Francis Poulenc: Dialogues des Carmelites
On occasion, librettists offer miraculous escapes for innocent victims of operatic violence and death. Jephtha was the last and most personal oratorio Handel’s composed against the background of Israelite oppression. The Israelite leader Jephtha vows to sacrifice the first living thing he encounters if he is successful in battle against the Ammonites. Once victorious, the unfortunate victim turns out to be his only child, his beloved daughter Iphis. After spending two months in the mountains with her companion to bewail her virginity, Jephtha’s daughter submits to her fate. However, this Old Testament outcome was far too brutal for audiences in the Age of Sensibility. Accordingly, the librettist Thomas Morell mitigated Iphis’s sentence from death to perpetual virginity, courtesy of an angel. Now that is what you call a lucky escape!