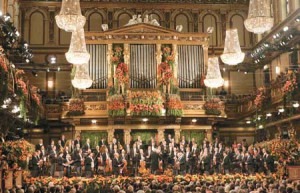 One of my most memorable new year’s day was in the year 2010. I went to a friend’s place to watch a TV broadcast of the New Year Concert, live from Vienna, with several music lovers and critics. Before the concert, we were so excited about it as if we were children again, waiting to be taken to the ‘Neverland’. As soon as our discussion on music and the arts became heated, the program began. The concert took place in the most beautifully decorated Musikverein, with white Lilies in almost every corner of the Groβer Saal. The members of the Vienna Philharmonic Orchestra were already seated on stage. Then, the 86 year-old George Prêtre slowly walked onto the podium. With a wave of his baton, he led the orchestra to embark on a journey with the delightful waltzes by Strauss. We, in Hong Kong joined in the ride with the audience in the Musikverein and many more listeners around the world. It was magical.

The Vienna New Year’s Concert began in 1939. However, for the first and only time, the inaugural concert took place, not on New Year’s Day, but on December 31 of that year. The Austrian conductor Clemens Krauss led the Vienna Philharmonic to perform an all Johann Strauss II program. Boskovsky, concertmaster of the VPO, conducted the New Year’s Concert from 1955-1979, for 24 years. In 1980, Lorin Maazel became the first non-Austrian conductor of the concert and became one of the most frequently appeared conductors in this major event. In 2005, Lorin Maazel omitted the Radetzky March to pay tribute to the victims of the 2004 Indian Ocean earthquake and tsunami. The practice of choosing a different conductor every year began in 1987, after 7 appearances in a row by Maazel. Members of the VPO voted for the conductor of the following year and the result is usually announced at the end of this year’s New Year Concert. The first of these rotating stars was the Austrian maestro Herbert von Karajan, who was in frail health at 78.

The music of the Vienna New Year’s Concert is dominated by the Strauss family- Johann Strauss I, Johann Strauss II, Josef Strauss and Eduard Strauss. However, occasionally it includes music from other composers, for example, in 2009, the fourth movement of Haydn’s Farewell Symphony was performed to mark the 200th anniversary of his death. The encores usually begin with a fast polka, followed by Strauss II’s The Blue Danube and Strauss I’s Radetsky March, during which the audience claps along under the direction of the conductor. There is not only beautiful music, but also including dance. Pairs of ballet dancers from the Vienna State Opera Ballet usually appear in the second part of the program, adding an elegant touch to the concert.

Originating around the World War period, the Vienna New Year’s Concert was initially conceived for the local Austrians as a source of hope for a better future. Nowadays, it encourages millions of music lovers around the world by bringing joy and optimism for the New Year ahead. If you missed this year’s New Year Concert, you may search for it in Radio Television Hong Kong, Radio 4’s achive (www.rthk.hk). Because we broadcasted it only 4 hours after the concert started in Vienna. The conductor for the 2012 New Year’s Concert in Vienna, is the Latvian conductor, Mariss Jansons. Happy New Year and love to you all!