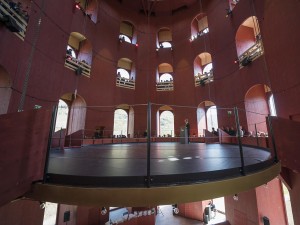 The alpine “Julier Pass” also known as the “Pass dal Güglia” and “Passo del Giulia” is a mountain pass in Switzerland. It connects the Engadin valley with the province of Graubünden, and provides the watershed between the basins of the Rhine and Danube Rivers. At an altitude of 2284 meters, this ancient mountain pass houses the remains of a Roman temple, and deep cart tracks in the rocks speak of its economic and military importance during Roman times. Just recently, the “Julier Pass” received a more contemporary temple in the shape of a 30 meters tall wooden tower painted in fiery red color! 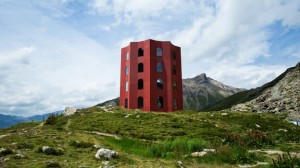 10 individual towers are interconnected via massive arching windows, and a performance stage lightly floats on the first floor. The ground floor features a reception area, and audiences are circularly and vertically arranged over four floors. This project was the brainchild of Giovanni Netzer, the founder and spiritual father of the “Cultural Festival Origen,” established in 2005. Netzer was not looking to create a monument—the structure is entirely temporary—but to “create a performance space in this spectacular natural setting that allows audiences to experience the great myths of humanity.” 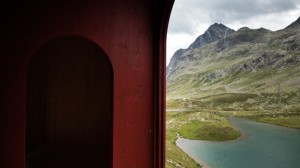 “A Dialog between performance space and the natural environment,” Netzer created an open and limitless spatial environment. The tower also becomes a powerful symbol for cultural exchange, as it is located on the linguistic border of several languages and dialects. Eventually, it will host operatic and theatrical performance throughout the year, and will offer a completely different perspective, as audiences will look straight down at the stage. And that was exactly the experience of 220 audience members during the grand opening in August. The musical selection featured 3 fragments from the 3 language opera Apocalypse by local composer Gion Antoni Derungs. Although Derungs makes use of divergent musical elements, the Romansh language, a descendant of spoken Latin that still has official status in the area, decidedly influenced his vocal music. The Apocalypse selections pay homage to the tower itself, as it is highly reminiscent of the great tower of Babylon. And since nothing lasts forever, especially not on the artistic stage, the structure will be dismantled in 3 to 5 years.