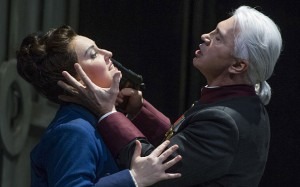 The casual operagoer would be forgiven for not being sure whether The Royal Opera House’s new production of Giuseppe Verdi’s Ballo in Maschera was set in Boston, as it usually is, or in Stockholm, as it often is and was originally intended to be by the composer before the censors got involved. But both guesses would be wrong. German director Katharina Thoma set her production in (probably) Sarajevo, 1914. 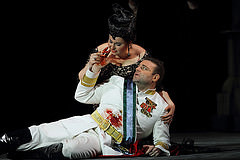 While the choice of such an ominous date and place added nothing at all to the story, it provided a visually attractive set, interspersing most scenes with an eerie foreboding of death. Occasionally this worked, as in the setting of the sorcerer Ulrica in a bourgeois society séance, rather than the tiresome fireside gypsy setting traditionally chosen by directors, or in the execution ground scene, set in a cemetery where the statues on the tombs came to life. But mostly, this production did little to help the audience circumnavigate the already confusing story of Riccardo, the Governor of Boston (or is it now an Austro-Hungarian duke?), who is in love with Amelia, the wife of his best friend and secretary Renato, and who taunts a sorcerer to tell him his fate which is death at the hands of the next person to shake his hand. Predictably, this will be the trusty Renato, who discovers the (unconsummated) relationship and sets out to plot the Governor’s murder at a masked ball in his house. 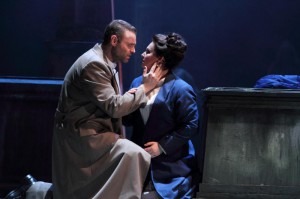 The Royal Opera House served up a stellar cast led by tenor du jour Joseph Calleja as Riccardo, who competently mastered the challenging role. A clarion tenor with an articulated vibrato in the vein of a Jussi Bjoerling, he provided charm and plenty of allure. Vocally, he was well matched by Ukranian soprano Liudmyla Monastyrska as his love-interest Amelia, who commanded impressive vocal resources, posing a voluminous challenge to her on-scene husband Renato, portrayed by Russian star-baritone Dmitry Hvorostovsky, who wisely retained composure and elegance. American mezzo Marianne Cornetti was a vocally and physically imposing Ulrica. For all the star power on stage, new-comer Serena Gamberoni, in her Covent Garden debut, handily stole the show as Oscar. Possessing a bell-clear voice, exceptional diction and an appealing natural presence, Gamberoni imbued the small role of Riccardo’s page with outsized personality and quality.

Daniel Oren conducted a temperate orchestra that played to a full house which appreciated the cast but was left unimpressed by the production.