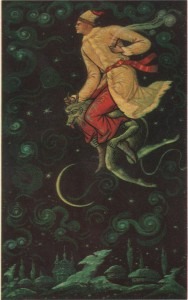 Nikolai Gogol, a dramatist, novelist and short story writer of Ukrainian ethnicity, is considered a seminal figure of Russian literary realism. His fundamental romantic sensibility is marvelously infused with strains of Surrealism and the grotesque. In fact, Gogol established a new trend in Russian literature by carefully mingling the horrifying and the humorous. His unique literary style forcefully emerged in an 1831/32 collection of short stories entitled Evenings on a Farm near Dikanka. Gogol encodes his early impressions and memories of childhood growing up in the Ukraine into literary miniatures of peasant life. Heavily influenced by Ukrainian folklore and cultural references, Gogol provides a short preface that introduces the reader to the beekeeper Rudy Panko. Serving as the narrator, “Panko the Redhaired” tells the reader of various wondrous tales he has heard.

The first story in the second volume of the collection is tellingly entitled “Christmas Eve.” A witch is flying across the night sky, and the devil has stolen the moon and hidden it in his pocket. It is the night before Christmas, and the devil decides to get back at the village blacksmith Vakula, because he paints grotesque portraits of him in the church. The Cossack Choub has a beautiful daughter called Oksana, and Vakula is deeply in love with her. She tells him that she will not marry him unless he can get for her the slippers off the Tsarina’s feet. The witch Solokha, who is unbeknownst actually Vakula’s mother, entertains the devil in her house. There is a knock on the door, and she quickly hides the devil in a coal sack. The mayor enters, but there is another knock, and the mayor hides in another bag. The sexton, who always had his eyes on Solokha enters, but at the next knock he also has to hide in a coal bag. This time it is the Cossack Choub, and when Vakula comes home, Choub goes into the sack with the sexton already in it. Vakula takes the heavy bags to get them to the forge, but runs into Oksana who once again belittles him. Vakula decides that he will bring her the slippers, and the local Cossack alerts him to the fact that the devil is on his back. Vakula tricks the devil, and they both fly to St. Petersburg to meet with Catherine the Great. After Vakula confesses his plight, he does receive the Tsarina’s slippers. In the meantime, Oksana has a change of heart and falls deeply in love with Vakula as well. She agrees to marry him even before he shows her the slippers. The blacksmith has made another painting in church, showing the devil in hell and the women bring their frightened children to spit on his ghastly image.

Nikolai Rimsky-Korsakov: Christmas Eve Suite
I trust you agree that this folksy fairy tale ticks all the right boxes for a successful transfer into the operatic medium. And that’s exactly what Pyotr Ilyich Tchaikovsky had in mind when he stumbled upon a libretto by Yakov Polonsky, based on Gogol’s “Christmas Eve.” The libretto had originally been fashioned for the composer Alexander Serov, but regrettably, he suddenly died in 1871. Tchaikovsky took up the challenge and by 1874 had composed his version entitled Vakula the Smith. Tchaikovsky reports, “All my thoughts are now intent upon my beloved child, darling Vakula the Smith. You would not imagine how I love him! It seems to me that I will positively go mad if I don’t succeed with him.” Despite Tchaikovsky’s best intention, the opera did not fair well. The reason for its failure was pinpointed by the composer César Cui, who wrote, “the style of Vakula is not operatic, but symphonic, and there is no correspondence between the music and what is taking place on stage.” Tchaikovsky took Cui’s criticism to heart, and revised Vakula into The Tsarina’s Slippers in 1885. Regrettably, the revised version did not enjoy rousing success either. And so it was left to Nikolai Rimsky-Korsakov to musically take up the Gogol short story. His four-act opera titled Christmas Eve premiered on 28 November 1895 in St. Petersburg. The orchestration bears the stamp of Rimsky-Korsakov’s coloristic genius and amply sounds adventuresome harmonies. There were some original controversies as his portrayal of Empress Catherine II offended some of the nobility, and the composer had to rewrite sections to gain permission for its staging.