Composers Love
To Russia with Love!
Fernando Sor and Félicité Hullin
by Georg Predota May 14th, 2012 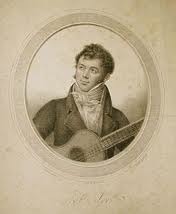 Towards the end of a highly successful performing and publishing career, the great Spanish guitarist Fernando Sor (1778-1839) — also known as Joseph Fernando Macari Sors, Josep Ferran Sorts I Muntades, Ferran Sor, Ferdinand Sor and Ferdinando Sor — vented his dissatisfaction with the general lack of musicianship in the French capital in a series of caustic, yet humorous titles and dedications. His Op. 35 published in Paris in 1828 sports the title “24 Extraordinarily Easy Exercises”. In his preface, Sor writes, “several people have found that my 24 Lessons for Beginners — his Op. 31 — required a somewhat too rapid progress, and that they were aimed at enabling the student to acquire a great talent; and that such an aim was not suitable for those who aim only to acquire a moderate ability, and who, unable to give great assiduity to studying, are content to accompany themselves and to play some agreeable pieces”. The set of six Bagatelles, Op. 43 is entitled “My Annoyances”, and the compositions are dedicated to “Whoever wants them”. Most famous, perhaps are the titles for Sor’s Op. 45 and Op. 48; “Let’s see if this is it”, and “Is this it?” The respective dedications read; “short and easy pieces in stages, which aim to lead to what has generally been agreed are difficulties. Composed and dedicated to the person with the least patience”. In his Op. 51, first published in Paris in 1832 he majestically proclaimed “At last!” Sor’s final words on the subject are found in the preface to his Op. 59, in which he attacks those “who have degraded the guitar by ignorance and routine, and have mutilated fine works by fashioning guitar arrangements that follow bad principles”. The latest research suggests, that Sor’s scorn was directed at the followers of Matteo Carcassi and Ferdinando Carulli, who had produced numerous unusual yet highly popular guitar arrangements. However, it seems that the ferocity of his musical attacks also masked some kind of frustration in his personal life. Once we take a closer look, we quickly discover that the source of Sor’s irritation was his recent separation from his wife, the celebrated ballerina and choreographer Félicité Hullin. 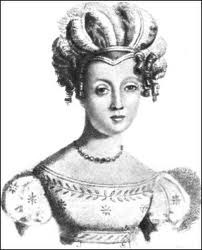 Much of Sor’s private life — and particularly his relationship with Félicité — remains shrouded in mystery. We do know, however, that he was born in Barcelona in 1778 and demonstrated unbelievable musical aptitude at an early age, quickly mastering the guitar and inventing his own system of musical notation. He formally studied at the Abbey of Montserrat, but his family decided that their son should follow a military career. As such, Sor took a post as a lieutenant in the Spanish army, and concurrently began to compose vocal works, guitar sonatas and an Italian opera that received 15 performances at the Barcelona Opera. Once he settled into an administrative post in the Andalusia region, however, Spain was invaded by Napoleonic troops in 1808. Sor did see some military action and initially composed a number of patriotic Spanish songs, yet eventually decided to join Napoleon’s cause. Once the tide began to turn against Napoleon, however, French troops withdrew from Spain, and fearing reprisal from the local population, Sor hastily left for Paris in 1812. Able to focus exclusively on establishing a musical career, Sor quickly gained renown as a virtuosic guitarist, yet was resoundingly rejected as an opera composer. Although we have only scant knowledge of Sor’s musical and other activity between 1813 and 1815, it is almost certain that he made the acquaintance of Félicité Hullin, who made her dancing debut at the Paris Opera in 1812. Official records compiled in the 1850’s suggest that Félicité was born in 1805; however, she almost certainly disguised her real birth date in order to appear younger. We do know that Sor got married between 1813 and 1815, and that his wife gave birth to a daughter. There can be no doubt whatsoever that Félicité was his betrothed, but in the interest of their respective careers, they initially kept their marriage from the public. Since Fernando’s career in Paris stagnated, he left for London in 1815. Félicité — apparently not entirely happy with this arrangement — grudgingly followed her husband in 1816, and still nobody knew that they were an item. In London, Fernando began to make friends among the English aristocracy, and created a market for guitar music; of course, he was ever so happy to fill the demand. His most famous works during his stay in London were a set of “Variations on a Theme by Mozart”, published as Opus 9 in 1821, and the highly popular ballet “Cendrillon”, undoubtedly written for his wife. The success of this ballet for both Fernando and Félicité — by now the English tabloids had wised up to the fact that the couple was married—had unforeseen consequences. Félicité was invited to dance in Moscow in 1823, and this time, her husband grudgingly followed his wife. For the next three years, husband and wife collaborated on a variety of successful musical project, including “Cinderella”, and to commemorate the coronation of Nicholas I, the ballet “Hercules and Omphale”. Félicité blossomed in her role as ballerina and singer, not only bringing a European tradition of dancing to Russia, but increasingly choreographing her own productions. As such, she became a seminal influence in the development of Russian ballet. Fernando in turn, was not entirely thrilled to be upstaged by his wife, and after a short and violent disagreement, she told him to get lost. And so, Fernando returned to Paris in 1827. Félicité continued her active dancing career in Moscow until 1835, and afterwards devoted all her energies to education. In 1837 Fernando was diagnosed with cancer of the throat, and the untimely death of his daughter Catherine plunged him into severe depression. His final composition “Memories of Russia”, for guitar duet was published in 1838. It sentimentally intertwines two Russian melodies, including one with the telling title ”What have I done to upset you”. “The “Beethoven of the guitar”, as he was called by the French music scholar F.J. Fétis died in Paris on 10 July, 1839. Félicité eventually took Russian citizenship, and married a certain Prof. Hertel in 1839. She died in Moscow, presumably around 1850.
Please click here to read about the related in tune article “Goya’s Genius and Spanish Art and Music in the 19th Century”.
Fernando Sor Study Op. 31 no. 20