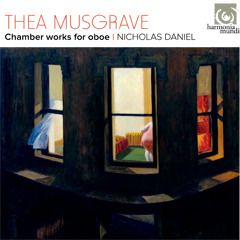 Rich and powerful musical language and a strong sense of drama have made Scottish-American composer Thea Musgrave (b.1928) one of the most respected and exciting contemporary voices. This recording features chamber works for oboe composed between 1960-2009, including her most recent works written specially for Nicholas Daniel: Cantilena, Night Windows, Take Two Oboes and an arrangement of Threnody for cor anglais.