In Tune Society
Music and Religion:
Long Live the Queen!
by Georg Predota May 14th, 2013 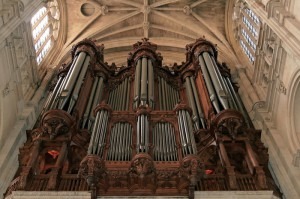 If you were hoping to read an article on a particular female monarch, I must disappoint you, because the title refers to the pipe organ, famously called the “Queen of Instruments” by the French composer and writer Guillaume de Machaut. The origins of this instrument — which basically produces sound by driving wind through a variety of metal and wooden pipes — can be traced back to the 3rd century BC. In time, it became the most complex man-made device and was installed in churches, synagogues, concert halls and even department stores. Each pipe organ is a unique work of art with individually distinct sound qualities, and the 17th and 18th centuries are generally referenced — thanks to the efforts of builders like Zacharias Hildebrandt, Arp Schnitger and Gottfried Silbermann — as the “golden age” of organ construction.

At that time, the pipe organ was, and still is, the single most important liturgical instrument in Protestant church music. As such, it is hardly surprising that a great number of highly talented composers created organ works and genres exclusively based on the Lutheran chorale, among them the chorale prelude, the chorale partita and the chorale fantasy. The chorale prelude is a short liturgical composition in which the entire chorale melody is presented once in immediately recognizable form. In this example of the Lutheran Christmas chorale Vom Himmel hoch da komm ich her (From Heaven above to Earth), composed by Johann Pachelbel (1653-1706) who significantly contributed to the development of the chorale prelude, the melody is heard in long note-values in the lowest voice and supported by active figuration. 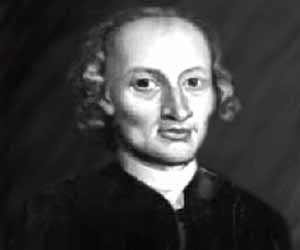 Johann Sebastian Bach (1685-1750) compiled a collection of chorale preludes entitled Orgenbüchlein (Little Organ Book) during his tenure as organist at Weimar and Cöthen. Originally he intended to compose a chorale setting for the entire church year, but stopped short of the required 164 compositions. In his setting of Durch Adams Fall is ganz verderbt (Through Adam’s fall, all is corrupted) Bach places the unadorned chorale melody in the highest voice. The melody is accompanied by a rhythmic figure not related to the chorale, and the jagged and dissonant leaps in the pedal musically depict the idea of falling.

Johannes Brahms (1833-1897) composed his collection of eleven chorale preludes Op. 122 in 1896, however, these short pieces based on verses of nine separate Lutheran chorales were only published posthumously in 1902. Unconsciously, Brahms was compiling and composing the final works of his musical career. Full of introspection and valediction, this collection musically depicts the composer’s acute awareness of mortality. It is hardly surprising that Bach, the composer that offered him musical and spiritual guidance throughout his life, provided the musical inspiration. Each phrase of the chorale melody Herzlich tut mich erfreuen (My inmost Heart Rejoiceth) is prefaced by a brief introductory section, borrowed from the melody itself. 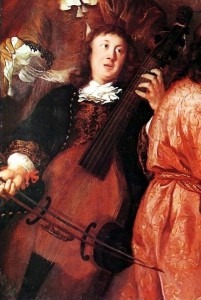 The chorale partita — actually a set of variations on a chorale melody — emerged in the early seventeenth century. History has credited Georg Böhm (1661-1733), a close personal friend of Johann Sebastian Bach, with making important contributions to this genre. His chorale partita Wer nur den lieben Gott läßt walten (Who lets the dear God rule) features sophisticated figuration in a series of characteristic variations. Throughout the set, the harmonic structure of the chorale remains intact.

Chorale fantasias are large sectional compositions. Each phrase of the chorale is individually developed through imitative counterpoint, ornamentation or echoes. Highly improvisational and virtuosic, this genre was developed and cultivated by north German organists in the second half of the 17th century. Dietrich Buxtehude (1639-1707) — German/Danish organist and composer working at the Marienkirche in Lübeck — composed a number of chorale fantasias, among them Nun freut euch, lieben Christen g’mein (Now rejoice, all ye children of God). In the first of ten sections, the melody is highly ornamented. Subsequently it becomes fragmented, densely chromatic and appears in varies meters.

The chorale — the congregational hymn of the German Protestant Church — appears in a wide variety of additional musical genres. These include the chorale cantata, chorale concerto, chorale fugue and the chorale motet. After Bach’s death, however, musical innovation involving the chorale practically ceased. Nevertheless, text and melodies continued to be used by Mendelssohn, Reger, Distler, Zimmermann and others.