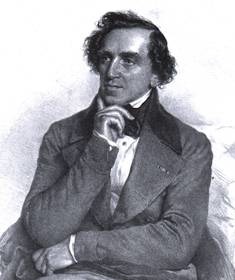 Giacomo Meyerbeer followed the tremendous financial and artistic success of Robert le diable with another blockbuster. Les Huguenots, five years in the making, dramatically staged the bloody events of the St. Bartholomew’s Day massacre in Paris in August of 1572, in which Catholics slaughtered thousands of French Huguenots (Protestants). Once again relying on a libretto written by Eugène Scribe, the opera premiered in 1836 and continued the lavish staging and melodramatic storyline expected of the new genre of Grand Opera. Above all, it was the mass scenes which contributed to the exceptional reputation of the new work, and Heinrich Heine suggested in 1842 that “the whole history of music in the last ten years revolves around [Meyerbeer], and for every musician whom one is obliged to discuss, one involuntarily arrives at the question of how he stands in relation to the music of Meyerbeer, or how he has positioned himself in that regard.” Hector Berlioz called the score “a musical encyclopedia,” and Richard Wagner suggested that, “we have learned from this son of Germany how religion can be preached on the stage.”

Les Huguenots was the first opera to be performed at the Paris Opéra more than 1000 times. The young Richard Wagner clearly sensed the potential of French Grande Opera and he embraced the tradition enthusiastically. In 1838 he set out to “outdo all previous examples with sumptuous extravagance,” and by November 1840 his opera Rienzi, der Letzte der Tribunen (Rienzi, the last of the Tribunes) was completed. Set in Rome and based on the novel of the same name published by Bulwer-Lytton in 1835, the work details the life of the late medieval Italian populist figure Cola di Rienzi. Wagner took on board all the toppings of Grand Opera, including ballets, rousing processionals, huge choral number and special stage effects. In its original form it lasted well over 6 hours, and at the end an entire building collapses on stage, burying the principal characters alive.

When Richard Wagner arrived in Paris in September 1839 he was received by Giacomo Meyerbeer, who listened to Wagner’s reading of the libretto to Rienzi. In fact, Meyerbeer not only provided letters of introduction to Dupanel and Habeneck, the director and conductor of the Paris Opéra, respectively, but also arranged to have Rienzi accepted and eventually performed by the Dresden Hoftheater on 20 October 1842. Although the opera became Wagner’s first artistic success, he later perceived Rienzi as an embarrassment. “Rienzi is very repugnant to me,” he wrote in 1871,”but they should at least recognize the fire in it.” In May1840, however, Wagner sent Eugène Scribe a copy of his sketch of Der fliegende Holländer (The Flying Dutchman) and the following month he mentioned it to Meyerbeer. Meyerbeer introduced him to the new director of the Opéra, Léon Pillet, who bought the story for 500 francs, but essentially nothing came of it. Wagner was once again threatened with imprisonment for running up a substantial financial debt. He was unable to get work as a conductor and made a little money writing articles on music and copying scores. In desperation, he composed six songs on French texts in an effort to stave off incarceration. 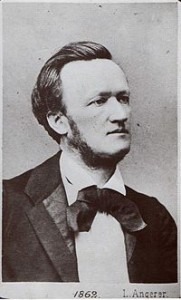 Despite the incorporation of the “Marseillaise,” these songs did not meet with much success and after two and a half dismal years in Paris, Wagner made his way back to the fatherland. Wagner later blamed much of his Parisian failure on Giacomo Meyerbeer — son of the enormously wealthy Jewish financier Judah Herz Beer and his wife Amalia Malka Wulff who also came from the moneyed elite — and in his essay Das Judentum in der Musik argues that the “superficial, meretricious values of contemporary art are embodied, above all, in Jewish musicians. The rootlessness of Jews in Germany and their historical role as usurers and entrepreneurs has condemned them to cultural sterility.” It has been suggested that the anti-Semitic tone of this essay — and Wagner’s extended vitriolic campaign against Meyerbeer — stems from being artistically as well as financially indebted to his compatriot. Wagner seemed to have forgotten that only with the renewed help from Meyerbeer was he able to stage The Flying Dutchman in Berlin.

Wagner himself conducted the Berlin performance, and Felix Mendelssohn — another Jewish composer Richard Wagner vehemently loathed–congratulated and embraced Wagner at the end of the performance. With the Dutchman Wagner began to gradually move away from French Grand Opera and towards an operatic style that would characterize his later music dramas. Richard Wagner was an extremely complex and highly unpleasant human being, yet his artistic creations represent the fullest musical and theatrical expression of German romanticism. It is clearly impossible to separate the man from his music, and Daniel Barenboim once suggested the following comparison. “Imagine a great beautiful silk tapestry of infinite color and complexity that has been stained indelibly. It is beautiful tapestry of miraculous workmanship and gorgeous color and silken texture, but the stain is very real.”