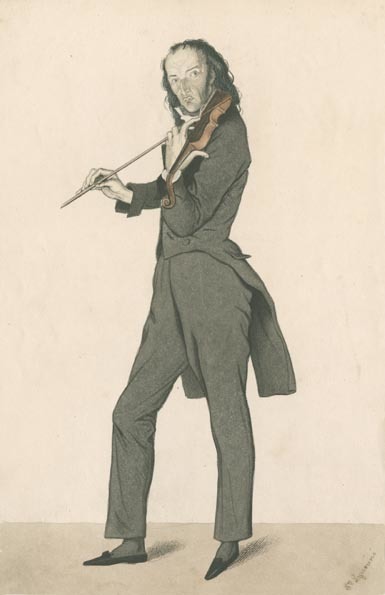 Nicolò Paganini in the 1830s

Performers with extraordinary talent were often accused of having made a pact with the devil to achieve their seemingly un-human abilities. We’ve already seen the temptation of Tartini. This accusation has been levelled against performers from violinist Nicolò Paganini in the 18th century to guitarist Robert Johnson in the 20th century.

These virtuosos were able to change the level of accepted playing by pushing the boundaries of what everyone knew could be done. Nicolò Paganini (1782-1840) was the most celebrated violin virtuoso of his time. He was extraordinarily tall and thin and had correspondingly long fingers. This meant that he had a much longer reach on the violin strings than most violinists and also meant that what was easy for him to play was impossible for others. This led to the charges that he had achieved his success from collusion with the devil.

Paganini was a technical genius on the violin, aided by his long fingers, and became famous for the effects he could create on the violin. A work of his childhood, Carmangola, is a variation for violin and guitar of a song from the French Revolution. One of the tricks he wrote into the score was for the violinist to imitate the sound of bagpipes by bowing on the bridge of the violin. Although the guitar accompaniment is rudimentary, the violin part has great, and largely original, technical difficulties.

Paganini lived on his reputation and made it as outrageous as he could. He had a great reputation as a lover and had an extravagant lifestyle. His tendencies towards excess was not helped by the hellish drugs, including mercury and opium, he took to deal with his syphilis, which caused both physical and psychological reactions.

His most famous work today are his 24 Caprices, and the final one, No. 24 in A minor, is a wonderful exhibition of the kind of display that Paganini was so good at. 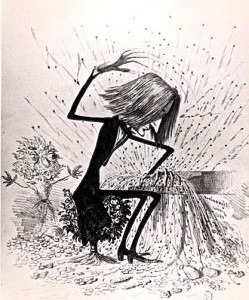 Caricature of Franz Liszt at the piano, circa 1845

His life as a virtuoso, on a level with all the praise and excesses we now credit to rock stars, was an inspiration for another generation of performers, including Franz Liszt. Franz Liszt was another of the young genius players. He had a supreme technical mastery of the piano and composed works that were too difficult for most players to conquer. In fact, when he published his early works later in his life, he had to simplify them so that normal pianists could actually play them.

Liszt took to the life of the virtuoso very easily – his consummate skills meant that he rose to the top of the new world of the piano virtuosos that he found in Paris. He toured Europe widely, and everywhere had ecstatic fans that were known to split their kid gloves, clapping so hard for him.

Liszt carried his skills everywhere in music: he performed, he wrote music, and he made arrangements of other musicians’ music, everything showing that he was the star of his time. He made piano arrangements of Beethoven’s symphonies, of Berlioz’ works, of his son-in-law Richard Wagner’s operas, of Schubert’s songs, and of Bellini’s operas – in short, anything that was familiar that could become fuel for his fiendish keyboard skills.

During the 1830s and 1840s Liszt’s advances in piano technique were matched by the advances in the development of the piano itself. It was now stronger, had a bigger sound, and was able to accommodate the demands that Liszt made of it – in concerts with the older instruments, he was known to break strings and hammers as he played. In honour of his predecessor, Liszt wrote the six ‘Paganini’ Etudes, based on Paganini’s own 24 Caprices.

Liszt: Grandes Etudes de Paganini, No. 6 in A minor

In this example of a virtuoso adding on top of another virtuoso’s work, Liszt shows us how far above the norm he, and Paganini, operated.