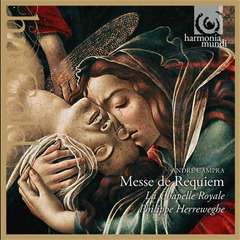 Campra: the missing link between Lully and Rameau? A rather simplistic view that meant this native of Aix-en-Provence was long excluded from the canon of ‘great names’ of French music, as if his official position as batteur de mesure (time-beater) at the Académie Royale de Musique could overshadow the masterpieces he composed all his life, in Toulon, Arles, Toulouse, and Versailles. His Requiem Mass seems to date from the period when he was maître de musique at Notre Dame Cathedral in Paris. Philippe Herreweghe’s 1987 recording of it is now regarded as one of the great classics of the French Baroque discography.