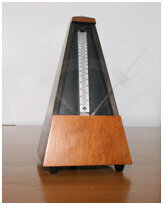 We were talking about tempo and how composers sought to transfer the sound in their ear to their performers’ brain. Starting in the Baroque, Italian words such as Allegro and Andante were used to show relative speed. But composers wanted more definition. How fast was the Allegro that Beethoven meant? In 1816 a new invention appeared (well, like many inventions, it was an older invention perfected) entitled “Maelzel’s Metronome.”

Johann Nepomuk Maelzel (1772-1838) was born in Regensberg, Germany. His father was an organ builder and Johann grew up in a musical world. He moved to Vienna in 1792, when he was 20 and started teaching music and building mechanical devices. One device was the panharmonicon, an automatic instrument that used organ pipes to imitate flutes and trumpets, and percussion (drums, cymbals, and triangle). The instrument played music by Haydn and Mozart and other contemporary composers. In 1808, Johann was appointed Court Mechanician in Vienna and, with his younger brother, started to manufacture ear trumpets, one of which was used by Beethoven. He also started to make mechanical figures that could play music, most famously a trumpeter who played military music. As you can see in this advertisement for his travelling show, he also made other automaton constructions. 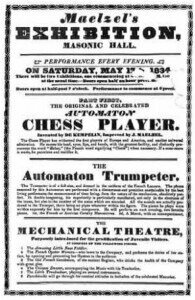 For musicians, these automaton players and orchestras weren’t really of interest – they could already play instruments. What they needed was something to help them keep track of time and that’s where Maelzel made his contribution that we still remember him. In 1814, Maelzel was in Amsterdam and got the idea of a balanced, double-ended pendulum as a time keeper from its inventor, Diederick Nikolaus Winkel. He perfected the instrument by adding scale divisions behind the pendulum that indicate the number of beats per minute. After examining many musical compositions, Maelzel gave numerical values to all of the common tempo terms. Up until Maelzel, machines like this were called “chronometers” – it was Maelzel who named it the metronome and we still use that name today, 200 years later. 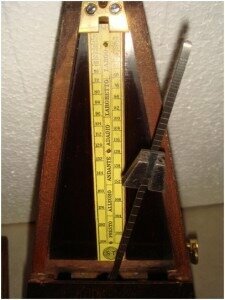 Although they had legal quarrels, Beethoven remained a friend of Maelzel’s and it is on Beethoven’s music that we start to see these metronome markings appear, such as M.M.=102 (M.M. stands for Maelzel’s Metronome). In a letter from Beethoven to the writer on music Hofrath von Mosel in 1817, he declared, “So far as I am myself concerned, I have long purposed giving up those inconsistent terms allegro, andante, adagio, and presto; and Maelzel’s metronome furnishes us with the best opportunity of doing so. I here pledge myself no longer to make use of them in any of my new compositions.”

The metronome Maezel invented looks much the same as today’s metronomes: a pyramid case with a graduated dial. It’s wound up by a key and spring mechanism and wherever you set the sliding weight, that’s the speed it will give you. 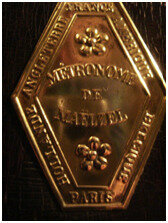 Unfortunately, due to his increasing deafness, Beethoven may have misused his metronome. One scholar has found that over half of the 135 MM marks that Beethoven used to be “absurdly fast.” But, as we start to change our ideas of what Beethoven’s music sounds like, these markings are starting to be adopted and are often shocking in their speed.