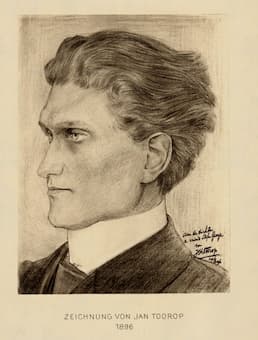 The German symbolist poet Stefan George (1868-1933) and Arnold Schoenberg (1874-1951) probably never met – as one commentator said, ‘One reason could be that as charismatic leaders of cults, they too much resembled each other.’

In Paris in 1889, Stefan George attended the Tuesday salons given by the French poet Mallarmé, where the leading literati of the day gathered. Other leading writers such as Hugo von Hofmannsthal, the librettist for Richard Strauss’ operas, attended, among other German-speaking intelligentsia. George’s collection of love poems, The Book of the Hanging Gardens, published in 1895, was addressed to Paula Dehmel, wife of poet Richard Dehmel (who wrote the text for Schoenberg’s Verklärte Nacht). 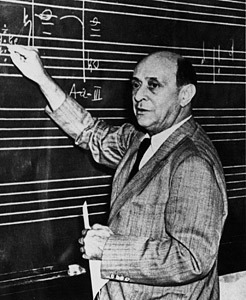 George’s Book was published as part of a larger set of poems, collecting his Das Buch der Hirten- und Preisgedichte (Book of Shepherds and Prize-Poems), Das Buch der Sagen und Sänge (The Book of Sayings and Songs), and Das Buch der hängenden Gärten (The Book of the Hanging Garden).

Only 15 of the 31 poems in Das Buch der hängenden Gärten were used by Schoenberg. In fact, he dropped the first 10 poems entirely and started his setting with poem number 11 through poem 25. The poems follow in order except for Schoenberg’s setting number 9, ‘Stimmen in Strom,’ which sets poem 31 in George’s ordering and doesn’t set poem 19.

The poems are about love, but love that is destined to end in separation. There’s no consistent narrative and nothing really happens. The opening scene is of brooks and fountains in dense foliage, Flowering meadows, halls with painted flagstones, and ponds full of fish.


He sees her and asks that she look upon him with favour.


From this point on, however, the poet goes back to description of the scene and she is only a vague shadow in the background.

It’s only in the 11th setting that we have the lovers together – trembling as they touch lightly, hidden behind a flower-decked gate.


And by the last setting, she’s gone and he finds the night clouded over and oppressive. 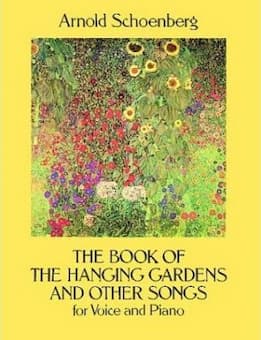 Schoenberg: The Book of the Hanging Gardens and Other Songs for Voice and Piano
© Book Depository

This was Schoenberg’s first experimentation with atonalism, or, as he called it, pantonalism. The first performance, in Berlin on 14 January 1910, came with a program note that included this line: ‘…I am obeying an inner compulsion, which is stronger than my upbringing: that I am obeying the formative process which, being natural to me, is stronger than my artistic education.’ He can foresee the problems that atonalism will cause in the musical world but says that his move towards it is compelled by his very nature.