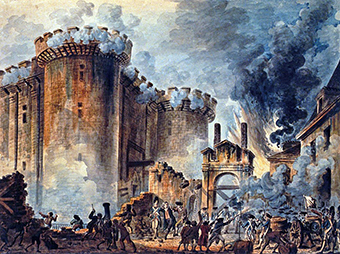 Houël: Prise de la Bastille (The Storming of the Bastille) (1789)

The long slow fall of the French monarchy during the French Revolution had several highlights, starting with the Storming of the Bastille.

Next the French Guards mutinied, and the royal family was forcibly moved from the palace at Versailles to Paris. All that happened in 1789. 1790 brought more troubles and on 31 August, the garrison in Nancy, France, mutinied. While the upper levels of the army were largely loyalist, the rank and file soldiers were becoming revolutionaries. 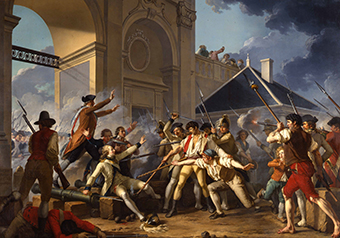 In Nancy, there were three regiments: the King’s Regiment, a regiment of Swiss mercenaries, and the camp cavalry. The King’s Regiment demanded an audit of their accounts and, in the end, seized the quartermaster and the unit’s pay chest. The colonel and other officers were confined to barracks. The Swiss mercenaries followed the same path, which was worrying to the officers, as the mercenary regiments were long thought to be the most loyal. The Swiss mercenary officers were able to quell the rebellion and punished the malefactors by making them run the gauntlet, where the prisoner must run between two lines of soldiers who are free to strike them. This discipline led to more problems. Finally, the Assembly in Paris decided the mutiny had to be put down and they demanded the release of the officers and the handing-over of the ringleaders. Unfortunately, the King’s Regiment had loaded a cannon and aimed it at the government troops. A junior officer, Désilles, stepped in front of the cannon to persuade them not to fire but he was struck down and the cannon was fired, killing about 60 of the loyal troops. The final death toll after three hours of fighting was an estimated 500 soldiers and civilians. 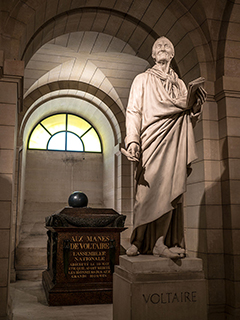 Voltaire’s tomb in the Panthéon

The action of Antoine-Joseph-Marc Désilles was commemorated in a painting by Jean-Jacques-François Le Barbier in 1794, showing the government troops coming through the gate and the mutineers confronting the officer on the cannon. Civilians can be seen in the upper right on the wall.

Meanwhile, in Paris, a people’s militia had been established under the Marquis de Lafayette, who had made his name earlier in the American Revolution. This National Guard included a band of 45 musicians eventually under the direction of composer François-Joseph Gossec. He wrote many nationalistic hymns and works for the band. On 20 September, there was a Revolutionary fête held on the Champ de la Fédération in honour of the mutineers. Gossec wrote this march for that occasion, and the work, notable for its ‘crashing tam-tam, brass and drums, alternating with silence moved the soul to despair’. The work continued to be a noted work of the Revolution and was played at notable funerals and for the reburial of Voltaire in the Panthéon on 11 July 1791. 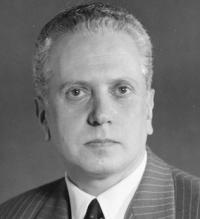 The full title of Gossec’s work, Marche lugubre pour les honneurs funèbres qui doivent être rendus au Champ de la Fédération le 20septembre 1790 aux mânes des citoyens morts dans l’affaire de Nancy [Slow march for the funeral honours which must be given at Federation Field on 20 September 1790 to the citizens who died in the Nancy affair], tells us everything we need to know.

Gossec: Slow march for the funeral honours which must be given at Federation Field on 20 September 1790 to the citizens who died in the Nancy affair

Georges Tzipine (1907-1987) originally trained as a violinist at the Conservatoire, winning first prize in 1926 before moving to conducting in 1931. A long-time friend of Arthur Honegger, he conducted many of the premiere recordings of his works. This 1954 recording was made with the Orchestre National de la Radiodiffusion Française and Orchestre de la Societe des concerts du Conservatoire, an orchestra founded in 1828 and which was made up of professors from the Paris Conservatoire and their pupils. It was dissolved in 1967 and was reborn as the Orchestre de Paris. 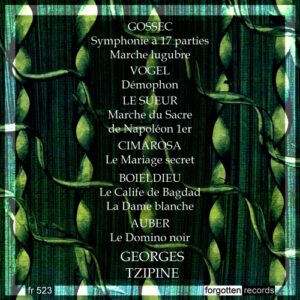