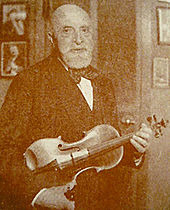 The turn of the 20th century was the golden age for violinists. Jascha Heifetz, Nathan Milstein, Mischa Elman, Fritz Kreisler, David Oistrach and Yehudi Menuhin, considered the greatest violinists of all time, graced us with their presence.

At least in part, in the cases of Heifetz, Elman and Milstein, this outstanding confluence can be attributed to the legendary teacher Leopold Auer. Auer, born in Hungary in 1845, was an outstanding violinist in his own right. Auer’s playing was transformed after studying with Joseph Joachim in Germany (the violinist to whom the Brahms Double Concerto is dedicated), and Joachim’s instruction formed the basis of his own teaching later in his life.

“Joachim was an inspiration for me and opened before my eyes horizons of that greater art of which until then I had lived in ignorance. With him I worked not only with my hands but with my head, studying the scores of the great masters and endeavoring to penetrate the very heart of their works”

Auer taught at the Saint Petersburg Conservatory for an astonishing forty-nine years. He also held positions at the Juilliard School and Curtis Institute in this country.

Auer is remembered as one of the most sought-after teachers for gifted pupils although he was feared for his grueling lessons. Auer demanded discipline and technical perfection. During lessons he would walk around scolding, observing, oftentimes harshly criticizing the poor young person playing for him. He was unrelenting, especially regarding lifeless playing, demanding more “krov.” (blood) in this case used to mean fire or passion. Many a student was poked in the ribs by Auer’s bow. Despite his exactitude, he was nonetheless devoted to his students. One of them was Nathan Milstein. 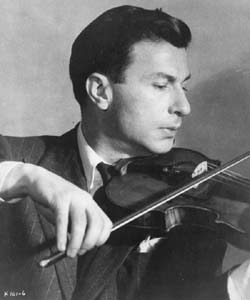 Nathan Milstein was born on January 13th, 1904 in Russia. Milstein’s parents, inspired by a performance of the then 11–year- old Jascha Heifetz, decided to give their 7-year-old mischievous son violin lessons. Milstein’s lessons started with the pedagogue Pyotr Stolyarsky, the teacher of David Oistrach and when Milstein turned eleven, Auer accepted Milstein into his class.

Milstein was a wonderful raconteur and his stories are legend. He was universally well liked for his genial personality as well as his gorgeous playing especially of Bach. One story he tells is meeting Vladimir Horowitz in 1921 when Milstein played a recital in Kiev. The Horowitz family invited him to tea. Milstein later said, “I came for tea and stayed three years.” The two artists became fast friends and chamber music partners.

Milstein made his debut in the U.S. with Leopold Stokowski and the Philadelphia Orchestra in 1929. Eventually Milstein became an American citizen but continued his touring for many decades astounding audiences even at the age of 82. I was lucky enough to be in the Indianapolis Symphony when he appeared with that orchestra. His silken tone and generous spirit were inspiring.

Milstein wrote numerous transcriptions for the violin and he composed his own cadenzas for the concertos that he performed.

Among his many honors are the Légion D’honneur from France, a Grammy Award for his Bach recordings and the Kennedy Center honor bestowed by President Ronald Reagan. In the 1980’s he published his memoir From Russia to the West and there is a fine film of interviews with this charming man. 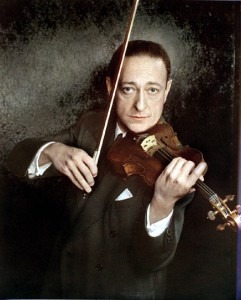 Legendary violinist Jascha Heifetz was also a student of Auer. Heifetz was born in Vilnius, Lithuania February the 2nd 1901. He started the violin at the tender age of three studying with his father who was the concertmaster of the Vilnius Theater Orchestra. Imagine that at age seven Heiftetz made his debut playing Mendelssohn’s Violin Concerto! He began his studies in 1910 with Auer.

The child prodigy travelled widely performing in Germany and Scandinavia. He met Fritz Kreisler in Berlin when Heifetz played the Mendelssohn at a private home concert. Kreisler said after accompanying the 12-year-old Heifetz at the piano to the several notable performers in attendance, “We may as well break our fiddles across our knees.” It is said that after an outdoor concert in St Petersburg in 1911, where Heifetz played for 25,000 people, that police had to protect the violinist from the sensation he caused among the audience members.

Heifetz left Russia with his family in 1917. His first U.S. performance at Carnegie Hall in New York that year caused a stir among audiences and reviewers. Fellow violinist Mischa Elman happened to be in the audience. He asked the pianist Leopold Godowsky sitting next to him, “Do you think it’s hot in here?” Godowsky replied “Not for pianists!”

Groucho Marx was among Heifetz’s many admirers. When Heifetz mentioned to Marx that he had been earning his living as a musician since the age of seven, Groucho quipped, “And I suppose before that you were just a bum.”

Anyone who has heard Heifetz’s recordings will attest to his amazing technical prowess on the violin. But even more stunning is his gorgeous tone, his fast expressive vibrato and his heart-grabbing portamentos (slides). His tempos are at breakneck speeds too, because he could!

His notable collaborations were with Rubenstein and cellist Emanuel Feuermann and after Feuermann’s untimely death Gregor Piatigorsky—the “million dollar” trios.

Many violin works were written for Heifetz including the William Walton Concerto. He championed composers such as Erich Wolfgang Korngold and Richard Strauss and he recorded virtually every work of the violin repertoire.

Heifetz was a teacher as well, first at UCLA and then at the University of Southern California and in the 1980s in his private studio in Beverly Hills. The Colburn School in L.A. has restored Heifetz’s teaching studio and it continues to be used for classes and as an inspiration for new generations of music students.

Heifetz’s exacting technique, combined with his unperturbed expression onstage and sometimes ungracious remarks earned him the reputation of being cold and irascible. But anyone who listens to his music making would agree that he played from the heart.