Blog
The Baschet Brothers and Their Instruments
by Maureen Buja July 15th, 2022

You want to travel with your guitar, but your luggage just won’t let you. How do you manage? The French inventor François Baschet ran into that problem when he wanted to travel after WWII. His guitar proving too big to pack, he created the Balloon Guitar, with the body of the instrument replaced by an inflatable balloon and a neck that would fold in half for travel. 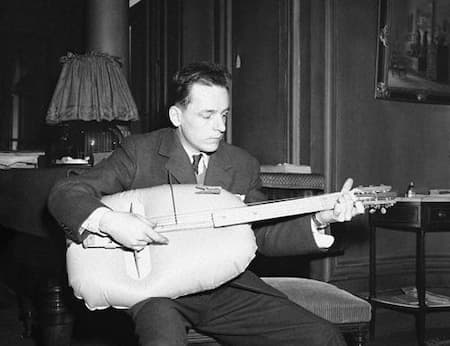 François Baschet and his Inflatable Guitar, 1962

A video shows its capabilities.

This was just the start of what François (1920-2014) and his older brother Bernard (1917-2015) Baschet would come up with. Where François was the performing artist, Bernard was the engineer and acoustician. Together they invented what they called Sonorous Sculptures – creations that were also musical. They didn’t seek to replace the regular orchestral instrument but to create, instead, both new instruments and new sounds. They worked with the pianist and composer Jacques Lasry and his wife, organist Yvonne Lasry and together the four created ‘Lasry-Baschet Sound Structures’ and started holding concerts on the instruments in 1965. 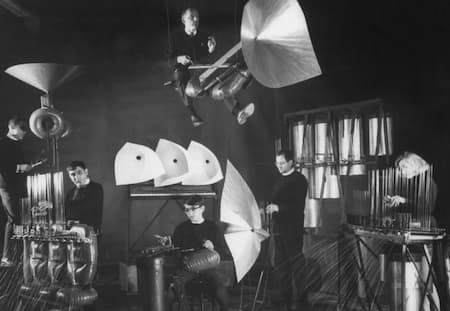 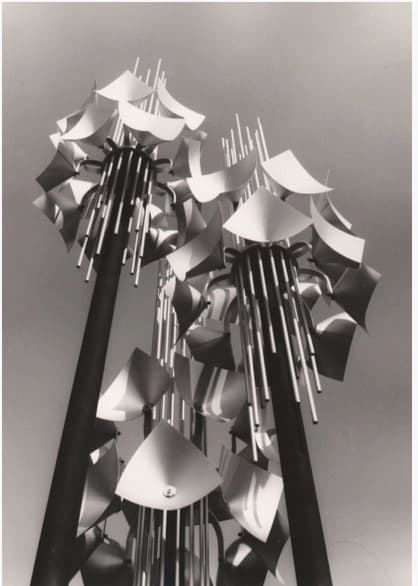 In Jean Cocteau’s film Testament of Orpheus (1960), you can hear Lasry-Baschet Sound Structures as played by the quartet at the 1 hour mark. Resonant sounds and metallic drum sounds help to create the other world of the creative imagination that Cocteau was seeking to show.

Their new structures sonores used metal such as steel and aluminum, glass, and used large, curved sheets of metal as amplifiers. 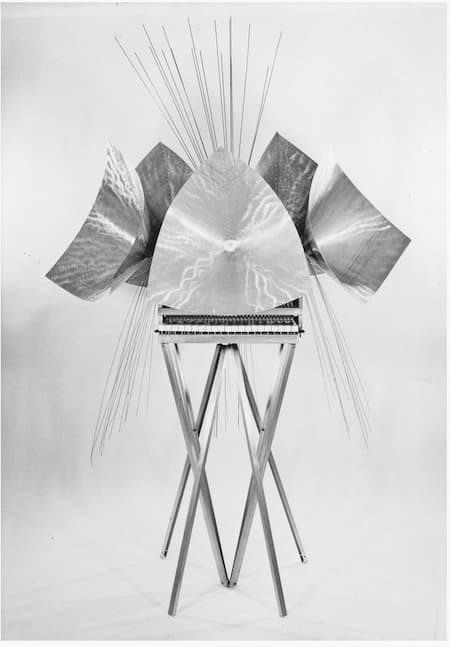 Sound Sculpture with a keyboard

The instruments were used, for example, as the opening theme music for the British children’s show Picture Box.

Their instrument the HemisFair Musical Fountain was played by the audience, who shot jets of water at them. This was created for the World’s Fair in 1968 in San Antonio, Texas. 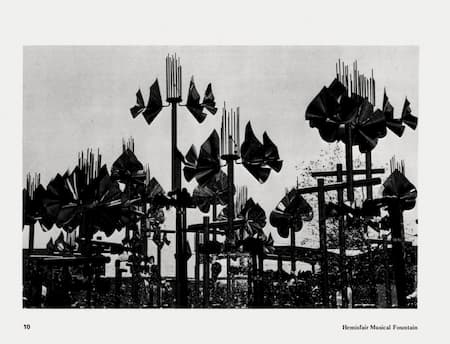 The kind of metal sculpture they did was used for its humorous value in the satirical film Are You Polly Maggoo?, where the designer is trying to create for the woman of the nuclear age and the models are trying not to get cut on the edges. The dresses were made of Baschet sculptures.

Who Are You, Polly Maggoo?

In 1965, they had an exhibition of their sonorous sculptures at the Museum of Modern Art in New York, which included their Cristal, an instrument that was played by using glass tubes as the resonating structure, played with wet fingers. A video on a modern and larger version of the sculpture, now called the Cristal Baschet, shows how one user took their original design and then multiplied it to become a different instrument, although still operating on the same principle.

Cristal Baschet (an instrument that needs to be wet)

Sound can find new outlets and new audiences. Children start by banging on the floor, then on pans. Adults can work with better toys!