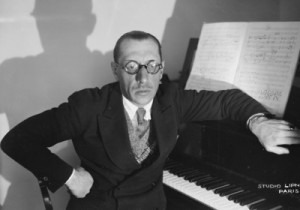 In 1918, Stravinsky was in dire straits: the revolution in Russia meant the loss of his property (and income), WWI meant the death of his brother fighting in Romania, his wife was ill, and then there were the four children to support. To help bring in some much needed money, Stravinsky wrote a small theatrical piece based on Russian stories.

The work, Histoire du Soldat, was written for 3 speakers, 2 of whom are also dancers, and a small ensemble of 7 players: violin, double bass, clarinet, bassoon, cornet, trombone and percussion. The odd instrumentation was Stravinsky’s way of imitating a typical village ensemble.

The Soldier is on his way home from the wars, on a 10-day leave. We can hear even from the opening, that there’s something wrong here – the fanfares are distorted, the rhythms are not for marching, and the sharp clarinet is scarcely a soothing accompaniment.

Stravinsky: Histoire du Soldat: Part I: I. The Soldier’s March (Northern Chamber Orchestra; Nicholas Ward, cond.)
The soldier sits down and takes his violin out of his pack and plays, but it’s never in tune.

Trading the Violin for the Book
(design by James Hodges)

The Devil appears and trades him a “book” for the violin. When the soldier says he can’t read, the Devil shows him that he can read: it’s a magic book. They trade violin for book and then the Devil says he must come teach him how to play the violin – it will only take 2 or 3 days. When the Soldier returns to his village, it’s not 3 days later, it’s 3 years later and everyone in his village shuns him, his beloved has married another, and even his mother thinks he’s a ghost.

With the magic book, the Soldier becomes rich, but starts to regret losing everything for material goods. The Devil returns, gives him the fiddle, but he can no longer play it. He throws it away and tears the book up.

The second part begins with the Soldier on the move again. He comes to a country where the Princess is ill and if any can cure her, he can take her hand in marriage.

Stravinsky: Histoire du Soldat: Part II: III. The Royal March (Northern Chamber Orchestra; Nicholas Ward, cond.)
The Solder approaches the King and tells him that he’s an army doctor and arranges to see the Princess. The Devil, of course, has his own plans and appears with the violin, posing as a virtuoso violinist with his own cure for the Princess. They play cards and the Soldier resolves to lose everything to the Devil and end his debt to the Devil. The Devil is defeated, and the Solder takes back the violin.

The Soldier and the Princess
(design by James Hodges)

The Soldier plays for the Princess and she gets up from her bed and dances: first a Tango, then a Waltz, then most modern, a Ragtime.

Stravinsky: Histoire du Soldat: Part II: IX. Ragtime (Northern Chamber Orchestra; Nicholas Ward, cond.)
The Princess and the Soldier end up in each other’s arms and the Devil crawls in, seeking the violin. The Solder plays the violin and the Devil now must dance, finally falling exhausted. He withdraws, but he’s not yet defeated and when the Soldier and the Princess try to return to the Soldier’s home town just for a quick visit, the Devil waits at the border. He has the violin and takes charge of the Soldier once again and takes him away to his own Triumphal March.

The title is important: this is not, as it often appears, L’Histoire du Soldat, but Histoire du Soldat, without an article. In English, this makes it not The Soldier’s Story but a much more generic Soldier’s Story. When you think that this was written during WWI, you see that Stravinsky isn’t telling the story of any specific soldier but of any soldier and the temptations that surround him as he seeks, as the Soldier seeks, to go home.

Stravinsky intended to get a small ensemble together and take this on tour around Europe, stopping at small villages, but was prevented by the Spanish flu epidemic – In Britain and France alone, more than 650,000 people died of the flu that year. The work received its première in Lausanne, Switzerland, on 28 September 1918, conducted by Ernest Ansermet.