Artists Interviews
A Talk with Grzegorz Kotów of the Szymanowski Quartet
by Maureen Buja April 15th, 2016 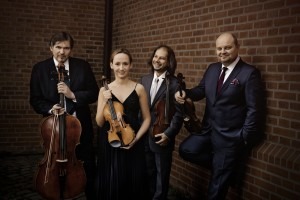 The Szymanowski Quartet was founded in 1995 and has become known as a sophisticated quartet that keeps a perfect balance between intellect and passion. The founding members, Grzegorz Kotów (violin), Vladimir (Volodia) Mykytka (viola), and Marcin Sieniawski (cello), were joined in 2014 by Agata Szymczewska on violin. She replaces Andrej Bielow, who went into teaching and couldn’t keep up with the touring schedule. Agata is an old friend of the Quartet, having studied with their same teacher in Germany and having appeared in many festivals with them.

The reason for taking the name of the Szymanowski Quartet name was their interest in bringing the music of Polish composer Karol Szymanowski, and the music of other Polish composers, to an international audience. Over the past 20 years, they have done just that, touring widely through Europe, North America and Asia. Their last visit to Hong Kong was in 2011 as part of a tour that included Beijing, Tokyo, and Taipei. Earlier tours had taken them to Macau, Guangzhou, and Shanghai.

We spoke with violinist Grzegorz Kotów at the start of their 2016 Asian tour to see what the Quartet has been up to and what lies ahead for them. This tour started in Korea, with concerts in Busan and Seoul, new cities for them, before continuing onto Hong Kong and then Taiwan. Unusual for a European-based ensemble, this is their second Asian tour this season, having already been in Tokyo in October 2015.

Their concert in Hong Kong covers a repertoire from Haydn to yesterday. They open with Haydn’s Joke Quartet before going onto a transcription of Szymanowski’s Nocturen and Tarantella. This work for virtuoso violin and piano has been arranged for them by Ukranian composer Myroslav Skoryk. It’s been in their repertoire for about 10 years now and has been very successful in their concerts.

Pianist Mary Wu will join them for Grażyna Bacewicz’ Piano Quintet No. 1. Bacewicz is one of the Polish composers that the Quartet loves to play and this quintet is typical of her neo-classical style combined with Polish folk music. The other four pieces on the concert are all new and all written by Hong Kong composers. It’s unusual for even a modern quartet to be so adventuresome in taking on four new pieces outside the realm of a modern music festival. Grzegorz noted with approval Joyce Tang’s work, The Bacewicz Obsession, that brought their beloved Polish composer into a new light and would be a piece they would take to other places on tour.

In discussing the need to play new music, Grzegorz Kotów said that even Mozart was new once and he felt that players today had an obligation to lead the discovery of new music and that in a concert like this one, mixing Haydn and new composers was important.

We discussed the Lviv Festival, founded by the Quartet in 2008. This is held in November, outside the normal summer festival season, but when the weather was not yet cold or rainy. Grzegorz Kotów noted that the lateness of the year often meant that the concerts felt more intimate and he enjoyed the timing. Unfortunately, 2015 was the last year for the festival in the Ukraine, due to the political situation. The Quartet is discussing moving it to Poland, their home country, but nothing for the 2016 season has been established yet.

As an international touring chamber ensemble, the Szymanowski Quartet brings a refreshing air to the otherwise staid repertoire as they seek out new music, bring rarely heard older music to their audiences, and, in general, bring a needed breadth and depth to chamber music as a whole.

The Szymanowski Quartet will be performing in Hong Kong on Saturday April 23rd, at the HKU Grand Hall.