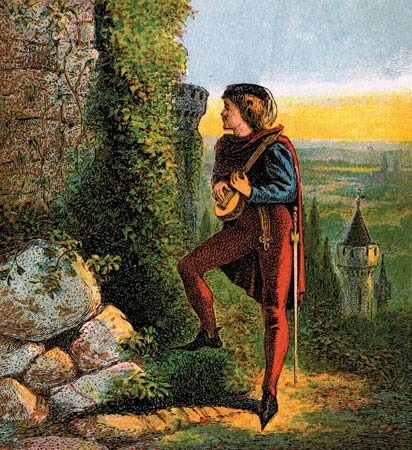 With all the news these days of computer spies, we’d thought we’d look at the historical problem of musical spies. We don’t mean stealing composers’ musical ideas, but the ways in which, over the centuries, music and composers have entered the realm of espionage.

The first thing we have to consider is that historically, composers and musicians have been interested in cryptography –secret writing that masks the true message. In World War II, one of the questions asked of potential cryptographers was if they could read a musical score. The officials at Bletchley Park, Britain’s centre for cryptanalysis, had noticed a correlation between musicians and their ability to solve puzzles.

This was noted even in the Renaissance where some musician-spies include the Dutch music copyist Pierre Alamire, who was also a spy for the court of Henry VIII of England. And you could even think of the troubadour Blondel as a spy, as he travelled across Europe, singing a song that only he and King Richard knew, until one day from a tower came the second verse and he had located the captive King. This is just a legend – the location of the king was known, but it makes a nice musical spy story. 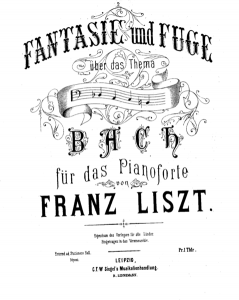 Title page of Liszt: Fantasy and Fugue on the Theme B-A-C-H

One of the earliest musical ciphers we know comes from a late 15th-century manuscript (Rules for Carrying on a Secret Correspondence by Cipher) held at the British Library. Philip II of Spain used a musical cipher in the mid-16th century. There was a more complicated system used by the Pope in Italy from the late 1590s which was discarded for a simpler system developed by composer Giovanni Porta around 1600.

All of these ciphers concern messages carried in the notes. A 17th-century manuscript spells out a message, supposedly to Charles II, with the stems and tails of notes that only appears when the message is folded.

The concept of music as the ‘universal language’ was carried further by philosophers in England German who proposed an artificial general language based on music. This was used in the early 19th century to try and teach blind French students how to read and communicate with their teachers via the violin. This attempt at communication with the blind was superseded by the development of Morse code.

Now, beyond the ideas of spying and secret messages are things embedded in music for the fun of it. The audience rarely has an idea that this is happening, but it can include things such as the word for ‘king’ (re) being set in its corresponding solmization (do-RE-me-fa-sol-la-ti-do) – also the word for ‘sun’ (sol). Note that the last name of Pierre Alamire (mentioned above), is actually being made up of the syllables LA-MI-RE. His real name was Peter van den Hove.

Another secret coding can come through ‘augenmusik’ or ‘eye music’ – things that show up on the musical page to illustrate the text, like the word for ‘eye’ being set with two whole notes, that will look like the two eyes: that the text is talking about. Or, you can hide someone’s name in the music by converting their name into note names: B-A-C-H is the most famous.

The first 4 notes of Liszt’s Fantasy are Bach’s letters. If you think that ‘H’ isn’t a note name, it is in German, where it stands for B-natural. The possible letters are A, B, C, D, E, E-flat (Es), F, G, A, B-natural (H), and B-flat (B). This inspired the Irish composer John Field to write a tribute to a particularly generous hostess with two melodies, one on B–E–E–F and the other on C–A–B–B–A–G–E.